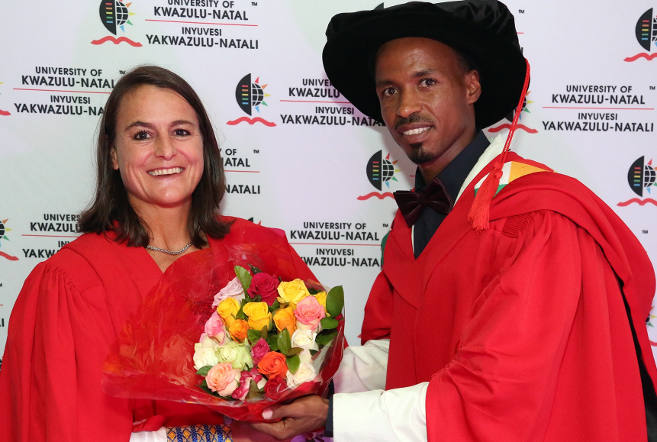 Taking a Bullet During Research Did Not Bring Doctoral Student Down

Dr Melkamu Kassa was shot and wounded, imprisoned and spent three days in a forest without food, water or shelter while doing research in Ethiopia for his doctorate from UKZN.

So to say Kassa, an Ethiopian citizen, faced great obstacles in his PhD studies is a huge understatement. What he suffered and endured was incredible, terrifying - enough to bring most people to their knees.

Yet he overcame all obstacles and graduated from the College of Health Sciences (CHS) fulfilling his life’s dream.

Kassa conducted his research amid Ethiopia’s civil unrest which began in 2016, during his most crucial data collection phase. The study, funded by the CHS, focused on health information and physical exercise for non-communicable diseases prevention in the Ethiopian healthcare system.

Funded by the CHS, Kassa was able to pursue his dreams despite enduring assaults and hardships, including the displacement of his family.

In August, 2016 Kassa and other passengers on a bus were arrested by the federal police while travelling from Addis Ababa to Bahir Dar. The arrests ended with the killing of 15 civilians at the hands of the security forces. ‘Students, farmers, civil servants, and factory workers were protesting against the government. Following the protests, there was gunfire, arbitrary arrests and human right violations by the police.

‘Civil liberty restrictions were imposed and a curfew enforced. Further, the government declared it would no longer tolerate any form of disruptions to law and order and instructed security forces to take necessary measures to restore peace,’ recalled Kassa.

Kassa supported his wife and child during his years of study relying on the funding he received from UKZN. ‘When the unrest and violence started in Ethiopia, I lost hope of completing my PhD because my family was displaced.

‘My supervisor Dr Jeanne Grace was dedicated to making my dreams and passion for writing come true, and in 2017 I published my first article. This achievement allowed me to focus on my studies and to complete and submit my PhD dissertation.’

Celebrating the completion of his PhD, his supervisor, Dr Jeanne Grace commented: ‘Dr Kassa is a humble and very dedicated, hardworking student. Despite his hardships at home, he never gave up and showed so much perseverance. I am extremely proud of him as he will be the first Ethiopian PhD student graduating from our Department of a cohort of 20 Ethiopians.’

‘There were a number of obstacles on my graduation path, including hunger, thirst, arrest, being shot and the possibility of being killed,’ said Kassa. ‘However, God was with me! Now at the age of 32, I have received my PhD from UKZN.’