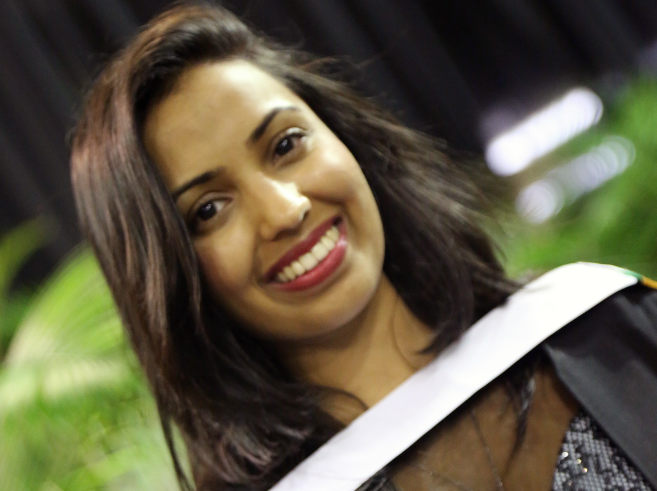 ‘I am happy my hard work paid off, bringing joy and pride to my family who motivated me right through the tough times. They are the reason I did so well,’ said Deonarain.

She was overjoyed with her “great result” as she now feels better equipped to give her patients the best possible treatment. It has also confirmed her belief that hard work pays huge dividends.

Deonarain’s future plans include starting her own optometry franchise and working to expand it nationally and, eventually, internationally. ‘Once the franchise is established, I would love to give back to the community and offer my services in the form of cost-free visual screenings and spectacles for the under-privileged.’

Her unfaltering faith in God and support of loved ones keeps Deonarain on the right path, motivating her to continue being the best she can be.

She advises those who are still studying to never lose faith in their capabilities: ‘Continue doing the best you can and you will see that the time and effort you put in will reflect in your results.’

Deonarain comes from a family of achievers. ‘My parents both have postgraduate degrees, while my brother obtained seven distinctions in his matric year (2017) and is currently a Pharmacy student at UKZN.’

Deonarain’s fervent love for animals and hope for a better, violence-free society led her to a vegan diet. Her diligence has also allowed her to excel outside her academic life, achieving KwaZulu-Natal colours in karate and going on to black belt status.