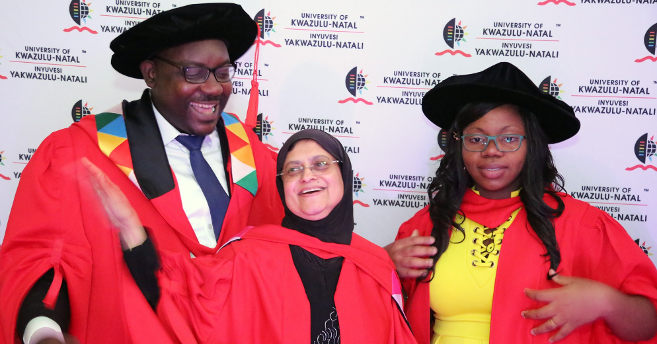 Founou-Zangue and Founou were both supervised by Professor Sabiha Yusuf Essack Head of the Antimicrobial Research Unit, while Founou also had Dr Cyrille le Duc F Djoko as her co-supervisor.

The couple said it had been difficult to juggle between family responsibilities and their PhD studies but they persevered and pushed themselves hard to meet deadlines and produce high quality results. ‘Being together while doing our PhDs made it easier as we had similar concerns and challenges. It was a case of team work,’ said Founou-Zangue.

‘I am very happy and have a light heart. The work was hard, but the success has calmed down my heart.’

Said Founou: ‘It is an incredible happiness and I am infinitely grateful to God for the protection, courage and strength given to me during the completion of my doctorate.

‘I am also very grateful and indebted to my supervisor and mentor Professor Sabiha Essack, who was a real inspiration. Her determination, devotion, motivation, guidance, confidence and kind-heartedness were key for this accomplishment.’

Considering antibiotic resistance is a priority for South African health policy-makers, the research was conducted from carriage and clinical isolates obtained from patients in a rural, district and tertiary urban hospital within the public health sector in the uMgungundlovu district.

Founou-Zangue says the study added new knowledge about the different resistance mechanisms associated with ESKAPE pathogens isolated from public hospitals in South Africa, and confirmed these bacteria as a serious global public health threat demanding rigorous surveillance and containment measures. It further highlights the necessity for implementation of strict infection, prevention and control measures and antibiotic stewardship in communities and hospitals.

‘The generated results call for an urgent implementation of global policies, guidelines, activities and effective interventions including regular screening and surveillance in communities and hospitals to contain the spread of ESKAPE pathogens, to monitor epidemiological changes, ascertain socio-economic impact and inform appropriate antibiotic treatment in South African hospitals,’ said Founou-Zangue.

He produced 12 papers from his thesis as first author and has co-authored a further 11 papers, some of which have been published in internationally recognised journals while others are still under review.

‘I investigated the carriage, risk factors, phenotypic and genotypic characteristics (resistance genes, virulence factors and mobile genetic elements) and clonal relatedness of circulating MRSA and ESBL-PE in pigs and humans in order to improve knowledge about risk factors associated with the emergence and spread of MRSA and ESBL-PE as well as their zoonotic transmission in the food chain in both Cameroon and South Africa,’ said Founou.

According to her, the importance of Cameroonian and South African food security is a regional issue. Her study revealed that LA-MRSA ST398 is already present in both Cameroon and South Africa and is probably underestimated in the absence of molecular epidemiological studies.

‘The high prevalence (more than 70%) of ESBL-PE in pigs in both countries as well as in humans in Cameroon highlights their active dissemination in the farm-to-plate continuum. The results generated serve as evidence of the threat of antibiotic resistance (ABR) for agricultural practitioners, policy makers, scientific communities and health policies regionally, and particularly in Cameroon and South Africa.’

She said her study provided the first report of the animal strain LA-MRSA in both Cameroon and South Africa and contributed new knowledge on the burden, risk factors and molecular epidemiology of LA-MRSA and ESBL-PE in both countries.

‘It further reveals gaps in the current state of knowledge about antibiotic use and ABR in food animals in Cameroon and South Africa, and suggests that the debate about ABR-related consequences in the farm-to-plate continuum is neglected and should be more seriously considered in these countries,’ said Founou.

She has produced a total of 11 journal articles as first author and co-authored 12 papers, some of which have been published while others are under review.

The couple are currently working in a clinical laboratory in Cameroon.