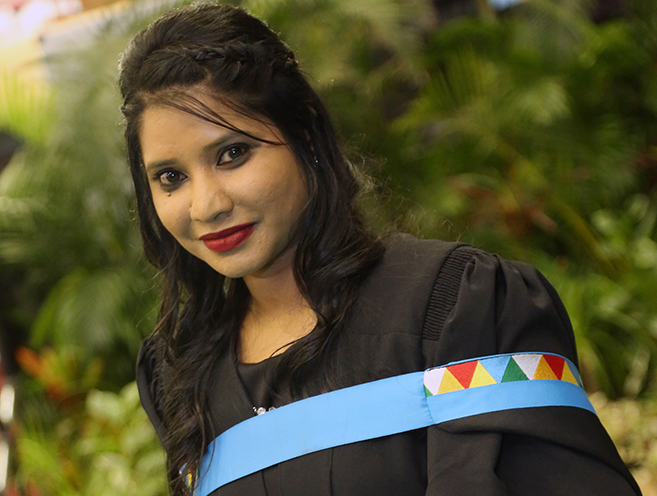 ‘I feel a sense of accomplishment and a step closer towards my goals. The greatest feeling was seeing the joy on my mother’s face, a single parent,’ said Govender, who hails from KwaDukuza.

She chose the topic to try and understand young masculinities, seek possible interventions to address violence and eliminate gender disparities at schools.

Largely influenced by social factors, her study illustrates how Grade three boys construct, mediate and reproduce violent masculinities within various school spaces, and the extent to which violence influences their lives.

Govender’s greatest concern was that the young boys may be unwilling to share their experiences. However, when she began the interview process, she was amazed at the wealth of knowledge they possessed on violence and were able to disclose personal experiences. Some even confessed to their misdemeanours.

‘The data offered a deeper insight into the lives of Grade three boys which allowed me, as a teacher, to understand the meanings they attach to their actions and the challenges they overcome to affirm themselves as males,’ she said.

The findings reveal boys who transgress or fail to employ conventional masculine identities were often teased by hegemonic masculine boys. ‘However, not all boys succumb to teasing as some seek to reclaim their power by resisting violence in order to defend the honour of their own masculinity.

Media has an impact on the construction of violent masculinities through play, in and out of the classroom. Boys imitate violent superhero characters and wrestlers while adopting violent hegemonic characteristics,’ explained Govender.

Teachers were also found to influence the way in which masculinities were shaped at school. ‘This study will benefit teachers as they will be able to gain a deeper insight into how violence plays out within the lives of young boys and the importance of encouraging alternate and non-violent forms of masculinities to counteract violence at school.’

Govender believes that exposure to violence at a young age increases the risk of perpetration of violence in future. ‘This study will assist schools and society to acknowledge the gendered nature of violence and recognise the importance of promoting gender-friendly relations based on equality from a young age as imperative in contributing towards the positive development of boys’ identities within schooling and as adults.’

Govender, who is grateful to her family, friends and supervisor Professor Deevia Bhana, is pursuing her PhD in Education. Her aim was to develop herself as a researcher and further explore gender relations within the school environment.