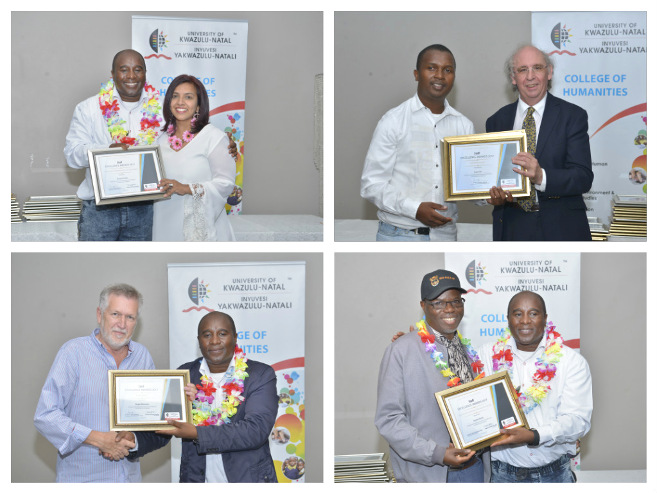 Prize winners and guests at the College of Humanities staff excellence awards function.

The College of Humanities hosted its annual staff excellence awards event during which professional and academic staff were recognised for their hard work, dedication and positive impact.

Speaking at the gathering, acting Deputy Vice-Chancellor and Head of the College of Humanities, Professor Stephen Mutula, congratulated staff for their outstanding contribution and innovative output in 2017. ‘We recognise the hard work you put in and applaud your work ethic and commitment to the College.’

Acting Director of Professional Services Mr Dane Arumugam added: ‘I am proud of the College of Humanities team. They have performed exceptionally well.’

Professor Douglas Wassenaar received the Grant Award for his role as a Principal Investigator (PI) and Co-PI research and training grants worth about R200 million to date.

‘The most humbling and rewarding part of these projects is working with and funding the development of talented young postgraduate and postdoctoral students. None of this would have been achieved without the close collaboration and support of many gifted and loyal colleagues. It takes a village,’ said Wassenaar.

‘One of the wonderful collateral spin-offs from the staff awards function was the immense spirit of collegiality at the event,’ said Naidu. ‘Over and above the various awards made to staff, it was great to see the level of academic and professional camaraderie among all the staff present.’

Mr Lucky Chili of the College Finance office received the Collegiality award and the REACHt award.

‘Winning the awards was among my greatest ever achievements - it was an honour to be recognised by the College,’ said Chili. ‘The awards have motivated me to continue to excel and I dedicate them to my team in Finance and all my colleagues in the College.

‘I also thank Mr Dane Arumugam for assisting me in my procurement space and trusting me with this critical portfolio,’ he said.

Staff members who had long service and others who were retiring were also recognised at the function.