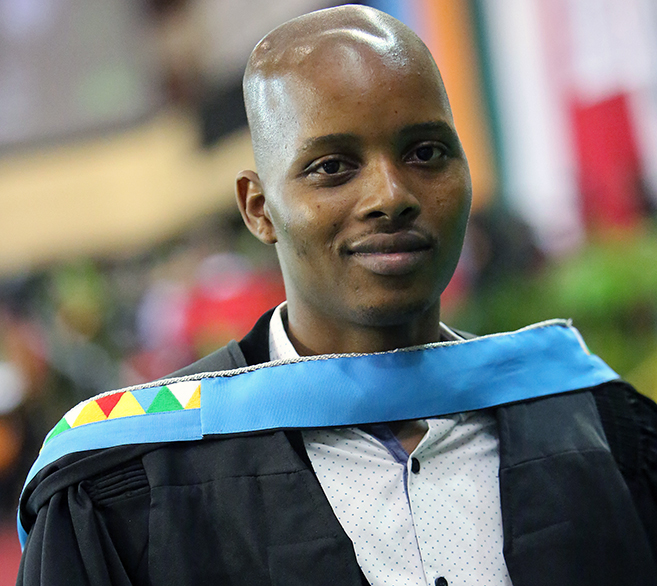 Mr Malibongwe Nelson Majola who graduated with an Honours degree in Community and Development Studies.

An excited and proud Mr Malibongwe Nelson Majola recently graduated with his Honours degree in Community and Development studies. The road to getting this degree, for Majola, was fraught with pain and difficulty. In 2008, he was shot and had to put his dreams of becoming a mine surveyor on hold to recover.

While recuperating at home, Majola saw firsthand the hardships endured by his family and his community, choosing then to pursue a career in the community development field.

The bullet wound caused Majola to suffer hemiplegia - a condition that causes total or partial paralysis of one side of the body.

His disability inspired him to become a role model for both able-bodied and disabled people.

He believes that being disabled is not a problem. ‘Problems starts when you regard disability as a problem to yourself. The proper way to deal with such a situation is to get educated, and although it is not easy you must have faith and believe in yourself.’

Majola suffered frequent epileptic attacks during his undergraduate years, which he says are now under control thanks to prescribed medication.

He couldn’t concentrate after experiencing the attack but he kept working hard with the support of his family and friends who always believed in him.

In his research, he examined the impact of the dropout rate from school on community development.

He's found that crime and poverty increased in communities where there was a significant school dropout rate because employment opportunities were limited and it was difficult for those people to maintain a healthy lifestyle. ‘I hope my research will contribute to identifying solutions to combat the issues of poverty in society,’ he said.

Majola is grateful to his mother and friends Mr Zethembe Mseleku, Ms Londiwe Mtanda and Mr Nsizwazonke Yende for their ongoing support and encouragement.

He is now enrolled for his Master’ degrees and plans to do a PhD in the future. ‘To those that are faced with disabilities and various issues, always have faith and believe in yourself. Never let anyone take advantage of your situation.’