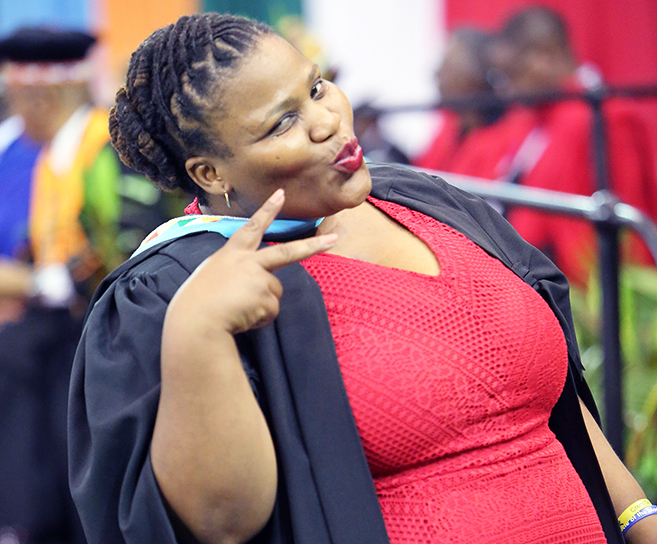 Retired Roman Catholic priests are generally satisfied with their lives, their ministry and their living situations, however, they have concerns about loneliness, failing health, limited savings, and becoming a burden on others.

This is according to research conducted by UKZN staffer and now Bachelor of Arts Honours graduate Ms Nombuso Dlamini, which earned her two merit certificates.

Dlamini’s research examined factors influencing the “disappearance” of Catholic priests from the community of the faithful after they retired.

The study also investigated how the aged priests’ social aspects and situation shaped their current reality, how they were doing in retirement, if they were happy with their current circumstances and whose interest it served to completely remove them from the community of the faithful.

Dlamini described receiving her degree from the College of Humanities as ‘the greatest feeling ever’ and ‘worth it in the end’.

‘Many Catholics do not know what happens to their aged clergy and they do not know where to start if they wanted to find them,’ she said. ‘These men have dedicated their whole lives to the service of others, so it is befitting to know how they can be assisted or made to feel important once they can no longer live among the faithful.

‘Retired priests interviewed all agreed that their spirituality is still intact although they felt they are merely waiting for death and no-one really cares. The men feel alone, helpless and no longer useful.’

Recalling some of the highlights of her research, Dlamini said: ‘My visits to retired priests were more than just about research, it felt like I was making a difference in their lives. They had so many stories to tell and they just wanted someone to listen to them. I then talked less and listened more.’

Dlamini, who is a Public Relations Officer for the College of Health Sciences, is keen to study further. ‘I have applied to do my masters. I have realised that it’s achievable so there’s no stopping now!’