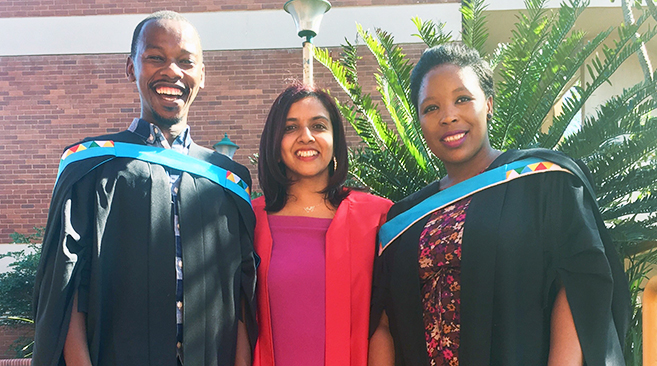 Their supervisor, Professor Maheshvari Naidu of the College of Humanities, remarked: ‘These two students have not had an easy road to get their degrees.’

Zulu fell pregnant towards the latter part of her studies, placing immense strain and pressure on her to remain committed to completing her degree while, at the same time, attending to her health.

Juggling both these critical aspects of her life proved very challenging and there were times when it became overwhelming. Throughout her pregnancy, she worked as one of the tutors in the Culture Cluster, displaying an admirable work ethic.

Naidu said she was proud of Zulu who persevered, triumphed and received an impressive 70% final mark for her research.

Zulu’s study was based on female African smokers at UKZN. ‘Smoking has historically been seen as taboo among Black African females,’ said Zulu. The study thus attempted to probe the reasons why the women smoke.

Zulu thanked her grandmother for supporting her during the many challenges she faced. ‘My grandmother helped me keep up with everything - pregnancy, school and working as I wanted to earn some money to save for the baby.

‘My baby’s father is a foreigner so there are many challenges, one of them being that he cannot obtain full time employment. However, with the help of my supervisor Professor Naidu, I have managed to pull through. I am grateful to her. She is my mentor,’ said Zulu.

Dlamini, graduated with 80% for his thesis. His study was on the poverty and constructions of masculinities and was based at Kenneth Gardens in Durban.

Said Naidu: ‘Melusi is a very bright young man with a keen intellect. However, I think he will completely agree with me that he allowed his term as a Masters student in our School to drag on too long.

‘When he did produce work it was of exceptionally high quality. His data collection and analysis were creative and critical and the ethnography that he collected was excellent. All of this is borne out by the final mark he was awarded which was 80%. He and his family should be incredibly proud of his accomplishment,’ said Naidu.

Both graduates will return to do their PhD supervised by Naidu.