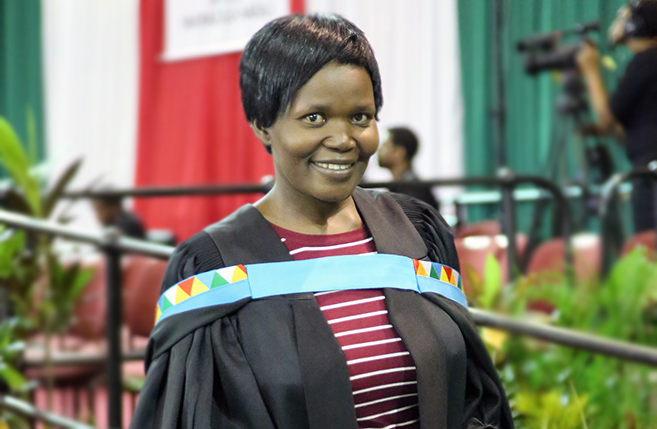 Hapazari examined the impact of economic empowerment programmes by government and non-government organisations on poverty reduction and gender equality in the area.

‘Poverty, unemployment and gender inequality remain huge global problems despite measures to eliminate the scourges,’ said Hapazari. ‘In Lesotho, poverty and unemployment are particularly endemic in rural areas. Economic empowerment is a phenomenon that is fundamental for combating the above mentioned social problems and others.’

Her study found the impact of economic empowerment by both the Government and NGOs was very low since an overwhelming majority of people interviewed (80%) reported that they received very little assistance or none at all. The study also revealed that unemployed people were facing a variety of challenges, including lack of access to the basic human needs of food, water and sanitation.

According to Hapazari, the poverty levels showed an increase over the six-year period between 2010 to 2015. ‘Government needs to institute more stringent measures to monitor the implementation of the economic empowerment programmes in place and to add more programmes. Unemployed people should use local resources and be more proactive by approaching the Government and NGOs for assistance to tackle poverty and unemployment.’

Hapazari, who finished her thesis within a year, credits that achievement to her supervisor Dr Noleen Loubser. ‘Dr Loubser made my academic progress relatively easier as she encouraged effective use of technology in academic interactions. We made extensive use of Skype, which enabled us to hold scheduled discussions on a weekly basis.’

Mother-of-four Hapazari worked hard to secure co-operation from Lesotho government ministries and NGOs, describing it as a ‘daunting process’.

She said her research was viewed with a measure of suspicion by both government and NGOs, who felt she was holding them accountable for a lack of poverty reduction.

Hapazari is passionate about research, writing and publishing academic papers as well as attending social and developmental conferences. At undergraduate level, she investigated the socio-economic experiences of children of incarcerated parents and presented the findings at a child welfare symposium organised by the Catholic Relief Services (CRS) and the Lesotho Ministry of Education and Training in October 2016.

She believes that through empirical research, sociologists have the capacity to influence policy makers and all other players on the need to develop policies and programmes that prioritise strategic interventions aimed at combating poverty and gender inequality.