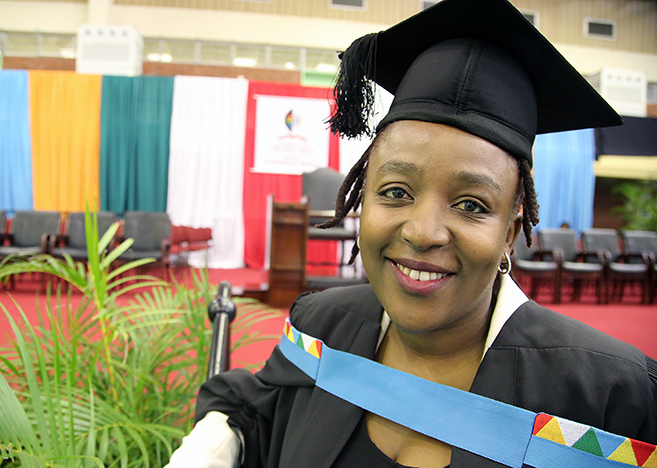 Ms Makhosazana Wiese who graduated with a Master’s degree in Development Studies.

Ms Makhosazana Wiese graduated with a Master’s in Development Studies degree earned through research which explored the impact of the Child Support Grant within a rural context.

Wiese interviewed women at a village called Ncunjane in Umsinga, KwaZulu-Natal, about their households, their livelihoods, how they used the grant and what contribution it made to their lives and households.

Explaining how her study developed, Wiese said: ‘I was working in the NGO sector on some development projects in rural communities in KwaZulu-Natal and became fascinated by the way people - mainly women - were able to organise their lives and their livelihoods in the face of poverty and other challenges, making the most of their situation.

‘It was interesting to see how they use their time and little resources they have, to support their lives.  When I got an opportunity to do a master’s degree, I wanted to do something that focused on rural women’s lives.’

The main finding of her study is that while these women spend the grant on consumable goods, they also spend some of it on productive assets such as livestock. Some of the money is also saved and invested in group savings schemes and on improving or building dwellings.

‘In a traditional rural context, it was interesting to find out that the women who receive the grant make their own decisions about how to spend the money, without having to consult with the men or other members of the households, which is traditionally the case in rural homesteads, although this is changing. The grant really enables its recipients to transform their lives and strengthen livelihoods and reducing vulnerability,’ said Wiese.

‘My study tells a story about how much of an impact these grants have on people’s lives and how people try to use the funds productively.  The current crisis has the potential to reverse some of the major gains that have been made over the years since the grant was introduced,’ she said.

Wiese thanked her family, friends and supervisors Professor Richard Balland and Professor Francie Lund for being supportive and providing encouragement during her study.

Offering advice to other students, she said: ‘Work hard and keep going, especially when it seems really hard and impossible. Identify positive mentors for guidance and constructive feedback. It is important to be able to be open to receiving even the most critical feedback and to use it to learn and do better.’

With an understanding of the broader development issues and problems in the country, Wiese, who lives in Germany, is planning to relocate to South Africa to collaborate with friends (ex-colleagues) to work on new concepts of development projects.