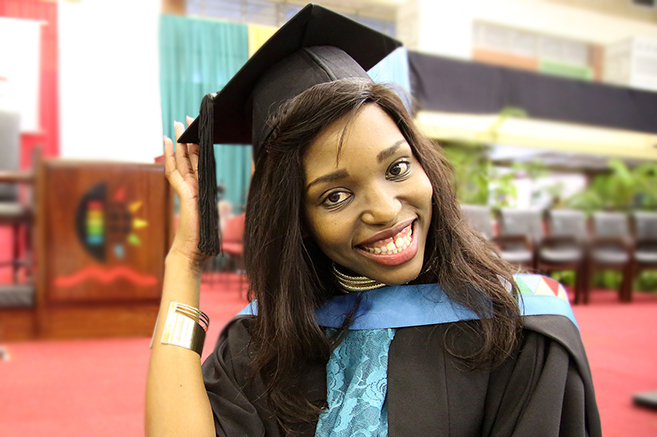 Ms Ayanda Ndlovu graduated with a Master’s degree in Population Studies from UKZN.

The use of condoms during sexual intercourse among young people was the subject of research for Ms Ayanda Ndlovu who graduated from UKZN with a Master’s degree in Population Studies.

‘HIV prevention has always been of interest to me and close to my heart,’ said Ndlovu. ‘Having lost a friend, brother and an aunt to AIDS-related illnesses, I have always known that I wanted to make a meaningful contribution in the field.’

During her studies, Ndlovu’s mother died. ‘My mom was my pillar of strength. Losing her while studying, decreased my coping levels drastically. I am happy that I conquered all that and was able to complete my studies,’ said Ndlovu, who dedicated her master’s degree to her mother.

Ndlovu’s research determined the levels of condom use during sexual intercourse among students, investigated the socio-economic and demographic determinants of condom use and further examined facilitating factors of condom use among South African tertiary education students as well as factors which hinder the consistent use of condoms.

‘Condom use consistency is a problem among students, however, condoms remain the most effective method to prevent both pregnancy and HIV infection. The increase in the level of condom use among students gives hope.’

Ndlovu believes methods and strategies should be devised and aimed at increasing the levels of condom use consistency. She feels her research makes a considerable contribution to sexual health research and will assist when sexual health strategies are being designed and implemented in countries such as South Africa.

Recalling some of the highlights of her research, Ndlovu said: ‘I have always thought men were more open on the subject of sex. However, I was pleased to discover that girls I interviewed were as open as males on the subject. In some instances, I did not even have to probe for additional information.’

She hopes her research findings will provide a better understanding on the lack of condom consistency among students and will assist policy makers and sexual health strategists to devise strategies to increase condom use consistency and in turn decrease the rate of HIV infection among students as well as the high levels of pregnancy.

Ndlovu thanked her family, friends and supervisor Professor Pranitha Maharaj. ‘My friends and colleagues contributed greatly by providing academic and professional guidance while my family supported me emotionally and psychologically.

‘My supervisor was my main pillar of support. She was always there for me, even in my hardest times when I felt I did not have strength to carry on. She always reminded me that I was capable even when I doubted myself the most.’