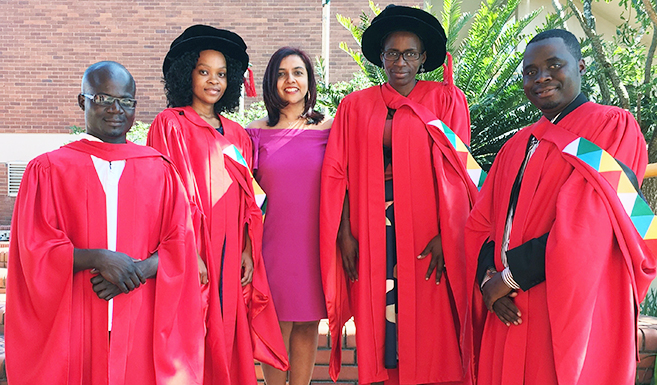 Professor Maheshvari Naidu of the College of Humanities is extremely proud of the four doctoral students who graduated under her supervision.

‘All four have triumphed under different sets of personal and intellectual challenges while three of them graduated within the minimum time of four semesters,’ she said.

Nzuza is in the Discipline of Anthropology, while her colleagues are in Conflict Transformation and Peace Studies.

Naidu says all four dealt with qualitative material and methodologies and worked in areas of her interests such as migration, positive peace, refugee politics, human rights and feminism, and health, which made them ideal candidates to supervise.

Nzuza’s study investigated challenges faced by young Black African women who have undergone breast cancer treatment. Findings indicate that after surviving breast cancer, the women are prone to psychological illnesses such as depression and physical challenges including mastectomy, hair loss and change in body weight and shape.

These changes, combined with local understandings and cultural constructions of ideal body images and sexuality lead women to reconstruct their understanding of themselves and their “ideal” Black bodies and their notion of being African Queens.

Nzuza said: ‘Today I can confidently say that my spirituality, support from family and friends as well as good mentorship were the pillars of my success. A number of challenges characterised my PhD journey but the unconditional support I received saw me through it all. Knowing that my daughter was cared for enabled me to be away from home and focus on my studies.

‘I am equally grateful to Professor Maheshvari Naidu who has nurtured me throughout my academic journey. Her selfless dedication and mentorship has brought me this far. She believed in my capabilities and channelled me accordingly. Her constructive criticism enabled me to engage with critical issues and unpack matters pertaining to women and their health, while her experience as a researcher, feminist and social anthropologist motivated me to excel in my academic journey’, said Nzuza.

Benhura’s study probed the impact of internal displacement on the access to secondary school education. Her study was contextualised in Hopley and Caledonia which are communities that host internally displaced persons (IDPs) in Zimbabwe. For more than a decade, the IDPs in these two communities have faced challenges in accessing basic social services, including secondary school education.

According to Benhura, the majority of these people were forced to move to these communities during the 2005 Operation Murambatsvina, a Zimbabwean government programme that demolished homes and buildings that had been deemed illegal.

‘The failure by the government to subsequently provide education (and other services) for the displaced populations has therefore compromised the displaced children’s rights to education. This is compounded by the lack of adherence to international internal displacement instruments and policies by the same government.’

Benhura said studying towards the doctoral degree was challenging, made more demanding by her choice of research site. Internal displacement is a politically sensitive issue in Zimbabwe, making the data collection process problematic.

‘In order to pursue my study, I resigned from work and relocated to South Africa. I faced major financial challenges, sacrificing time with my family, particularly my youngest child.

Her response to any work submitted was always encouraging and, most importantly, quick. My work was never held up and this helped me complete my study within a short time. In addition, my supervisor assisted me with research assistant positions which alleviated some of my financial difficulties,’ said Benhura.

Shoko’s study examined the notion of positive peace. He worked on the premise that when people access basic amenities equitably, they have inner peace and they become productive in their societies. The study sought to explore the connection between water access policies and positive peace in rural areas in Zimbabwe. Policies put in place by the government were explored vis-à-vis informal practices.

Shoko said that the PhD process was taxing, but enriching. His academic journey was largely supported by his uncle Professor Elias Mpofu. ‘Not only did he contribute to my earlier education on a financial level, but he also provided the necessary mentoring. My wife Rhoda has been a pillar of support raising my two daughters Catherine and Carol during my absence.

Shoko added: ‘There is no-one I know with a persona as motivating as Professor Naidu’s. Her hands-on approach is absolute and she sometimes pushed me to the brink! I cherish her professional approach and I aspire to follow her example.’

Makanda’ study, co-supervised by Dr Khondlo Mtshali, involved the crisis of refugees. His work was undertaken among the Congolese community living in Durban and probed the insights of the Congolese refugees in South Africa’s peacebuilding interventions in the Democratic Republic of Congo, a country steeped in unending conflict.

Using the conflict transformation theory, the study argued that drawing from the views and insights of the Congolese refugees may bolster an all-encompassing South Africa’s peace-building intervention in the DRC’s conflict.

Makanda thanked Professor Naidu for her indefatigable support and guidance. ‘Her unstinting academic support enabled me to carry out this research - although under immense pressure - in its prescribed time. It has been an exceptional privilege to learn from her experiences as an NRF-rated researcher and as an academic and a mentor.’

Makanda thanked Mtshali for his invaluable guidance, encouragement and support.

‘Despite his late acceptance as co-supervisor and his many other pressing academic demands, he demonstrated a keen interest in this work and provided more constructive feedback on the literature review and theoretical frameworks of this manuscript. I am grateful to him,’ said Makanda.

Makanda is deeply indebted to his late father and mother for encouragement, support and funding as well as his siblings: Frank, Oti, Peter, Jacky and Christine, and his partner, Fezile Mthembu.