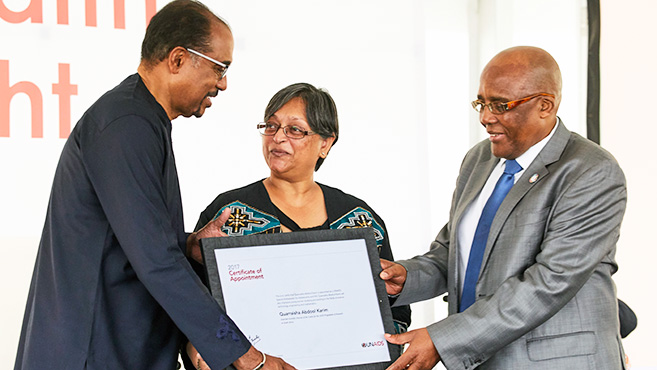 Professor Quarraisha Abdool Karim, respected as one of the world’s leading AIDS researchers, has been appointed as a UNAIDS Special Ambassador for Adolescents and HIV. In her new role as a UNAIDS Special Ambassador, Abdool Karim will focus on adolescents and HIV, while also championing the involvement of young women in Science.

‘I am delighted that Quarraisha Abdool Karim has accepted this position,’ said Mr Michel Sidibé, Executive Director UNAIDS. Sidibè made the announcement at the launch of the UNAIDS report, Right to Health, on Monday 20 November, at the Michael Mapongwana Community Health Centre, Harare, Khayelitsha, in Cape Town. There was a strong community presence at the event attended by the Minister of Health, Dr Aaron Motsoaledi, representatives of TAC and several civil society organisations.

Sidibè said that Abdool Karim was ‘a strong and consistent champion of young people living with and affected by HIV.’ He said that she will use her new role ‘to continue to translate scientific research and knowledge into people-centred solutions and prevention programmes to reduce the factors making young people so vulnerable to HIV infection. UNAIDS looks forward to supporting her work.’

Abdool Karim has made pioneering contributions to understanding the HIV epidemic in young people, especially in young women, and is a strong advocate for the rights of people living with and affected by HIV.  ‘This is a befitting appointment for Professor Abdool Karim who has spent more than two decades researching how HIV/AIDS is spread in South Africa, and its impact on the most vulnerable groups including adolescent girls and young women,’ said Dr Albert van Jaarsveld, Vice-Chancellor, University of KwaZulu-Natal.’ He said that ‘her commitment to human rights and access to healthcare is also well-documented and serves as a cornerstone of her research undertakings.’

She was the Principal Investigator of the landmark CAPRISA 004 tenofovir gel trial which provided proof of concept for Microbicides, highlighted by Science as one of the Top 10 scientific breakthroughs in 2010. Professor Abdool Karim has more than 170 peer-reviewed publications and has authored several books and book chapters.

Responding to her appointment Abdool Karim said that ‘as we increase our understanding of the HIV epidemic and the transmission dynamics that place young people at higher risk of infection, all sectors of society must work together to make sure that adolescents have access to the information and services that can keep them safe and well through a crucial period of their lives and into adulthood.’

Her appointment as a UNAIDS Special Ambassador is an honorary position and Abdool Karim will fulfil this role while in her position as Associate Scientific Director of CAPRISA and Professor in Clinical Epidemiology at the Mailman School of Public Health, Columbia University. She is an Honorary Professor in Public Health at the University of KwaZulu-Natal.