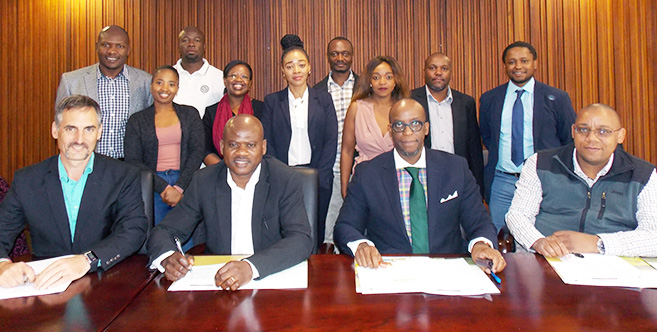 Seated from left: Mr Kevin Meier, Professor Albert Modi, Mr Jerry Lengoasa and Mr Sibonelo Mbanjwa with colleagues at the signing of the MoUs between the institutions.

The University of KwaZulu-Natal’s School of Agricultural, Earth and Environmental Sciences (SAEES) recently hosted a launch workshop on the Westville campus to commemorate the signing of Memoranda of Understanding (MoU) between UKZN and the South African Weather Service (SAWS), and SAWS and Umgeni Water (UW).

The launch workshop took place on 17 November in partnership with key partners SAWS and UW, and the Department of Environmental Affairs (DEA), which provides oversight for the agreements. The signing of the MoU was facilitated by the uMngeni Resilience Project (URP) as part of its early warning systems component.

Honorary Research Associate Dr Tafadzwa Mabhaudhi noted that interactions between the organisations represented had been happening at a technical level and that these official agreements give context and meaning to those interactions.

The purpose of the workshop was to delineate a way forward, with the ultimate purpose of the agreements to produce tangible outputs for implementation that will benefit ordinary citizens.

The DEA’s Mr Sibonelo Mbanjwa, Director of Climate Change Adaptation and Natural Resources, said the importance of these agreements was in the context of national efforts to develop resilient societies.

‘This project provides great opportunity and potential for us to demonstrate what we can do as a country in terms of climate services,’ said Mbanjwa.

Professor Albert Modi, Acting Deputy Vice-Chancellor of the College of Agriculture, Engineering and Science (CAES), spoke about the focus of UKZN’s relevant research on rural economic development, water use efficiency and productivity, especially the URP project with the uMgungundlovu District Municipality (UMDM).

Modi expressed excitement at the signing of these agreements, and said that in the context of UKZN’s increasing focus on the quality of its research outputs and on making research relevant to society, this kind of collaborative work would be important.

SAWS Chief Executive Officer Mr Jerry Lengoasa expressed delight at the signing of these agreements, noting their importance but emphasising that their value is in implementation, for which practitioners and partnerships are essential.

‘Working with you as the three institutions is a translation of a vision into practice,’ said Lengoasa.

Mr Kevin Meier of UW noted that while their work was more operational than research-based, this agreement will be a huge step forward toward being able to plan better for flood and drought events. He noted a gap in climate change data for research and said the agreement is useful for research to get where it is needed.

Ms Lungi Ndlovu of UMDM said the meeting represented a meeting of minds, and an opportunity to implement and deliver information and services that benefit all citizens.