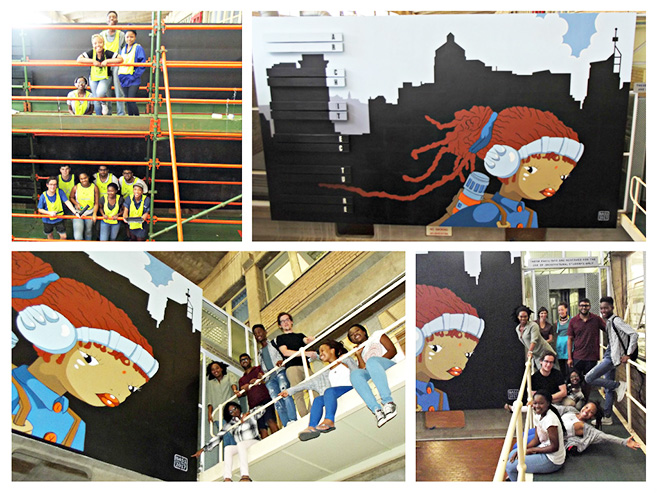 First-year Architecture students from the School of Built Environment and Development Studies (SOBEDS) recently painted a new mural on the entrance wall of their studios on Level 7 in Denis Shepstone building, Howard College.

Said Horner, ‘The mural was last painted two years ago by postgraduate students as part of the Masihambisane project. This year we decided to use it as a practical Visual Communication exercise for the students. Prominent Paint has provided ongoing support both in terms of paint and in terms of lectures for our students – our first project with them was the base colour wall in the studio on which local graffiti artist Giffy painted an “Archi monkey”.’

The mural design process was an emergent, collaborative one. It began as a winter holiday project where students were asked to reimagine the mural based on the theme Metamorphose. While no single image was chosen outright, the team decided to move forward based on a design by Mr Tino Mukumbareza showing a large, stylized character against a dark background.

Other themes that arose frequently in students’ work were the Durban skyline and the head/ headdress of an African woman “unravelling” into the city.  Bush worked to bring these ideas together in a manner inspired by Berlin street artists BTOY.

The final design now seen on the wall consists of three layers of images reflecting the context of an architectural student in Durban: the background image shows significant landmarks of the Howard College campus, namely MTB and Howard College Buildings, the mid-ground is a composition of Durban’s diverse architecture forming a city skyline in and in the foreground is an Architecture student with drawing roll and ear phones– a sassy, multi-cultural image of a young woman.

Student Mr Daniel Daruty de Grandpré saw this as an opportunity for him to get involved creatively while also bonding with his classmates. ‘As an Architect, at some point your work will be seen by the public so I feel this was an opportunity for us to understand that. It is also important to express yourself artistically outside of architecture and this also allowed for that opportunity.’

Ms Bonnie Bopela, another student, added, ‘When our lecturers first mentioned that there would be a possibility that we could paint a new mural on the architecture board I was really excited about the idea. I have never done anything like this before and have always wanted to. I thought it would be an accomplishment that we as the First Years could claim as our own that represented our course and all the students studying it.  And more than anything I knew it would a whole lot of fun.’

Recognising the efforts of the team, Acting Dean for the School Professor Ernest Khalema said, ‘Well done to the Architecture team. The mural looks great. Congratulations to the students and their lecturers for putting so much effort and dedication into making this happen. It looks fantastic.’