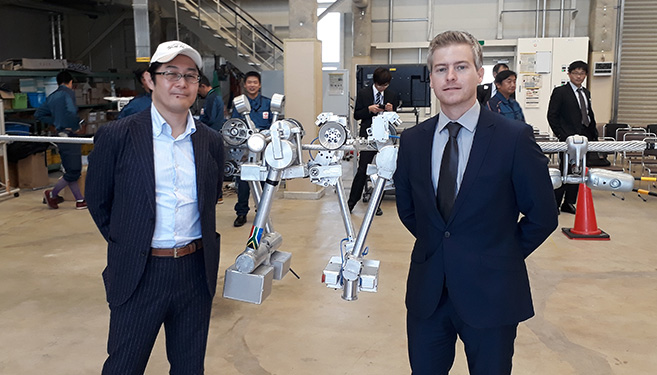 The technology was developed in collaboration with Eskom and serves to improve current inspection methods of power lines. The technology has been patented in the USA and South Africa (and pending in other regions) by UKZN’s technology transfer office, InQubate, which is working with Lorimer to commercialise the technology and leverage developmental funding. The technology has attracted seed funding of approximately R1.8 million from the Technology Innovation Agency for automation development and building a prototype, as well as from the KZN Department of Economic Development, Tourism, and Environmental Affairs’ Technology Transfer Fund for live-testing of the robot on energized lines.

The interest from TEPCO piqued last year when TEPCO’s Mr Tadashi Mano met Lorimer at a conference in the USA. Following a visit to UKZN’s Engineering Labs, Mano invited Boje and Lorimer for an all-expenses paid trip to demonstrate their robot in Japan in October 2017, indicating a great vote of confidence in the technology by an international power utility.

The demonstration was successful and left a “great and lasting impression” on TEPCO - an enthusiastic potential customer. It was a step toward building a working relationship with the company, and suggests that Lorimer and team can start contributing to utilities’ businesses by improving the quality and cost of certain types of power line inspection. Given the positive outcome of the visit to Japan, Lorimer is excited at the prospect of future work, where both TEPCO and UKZN can benefit.

Lorimer and his team have worked very hard to improve the technology, indicating that they are close to the point where the robots may be used commercially on live power lines. Mano seconded that sentiment and described the robot as “the edge of technology”. Lorimer was particularly grateful to his co-inventor, Professor Edward Boje for his ongoing support.

*Seed Funding was obtained through assistance from UKZN InQubate, which also played an integral role in getting the team to Japan. For further information on this technology or advice on taking your own technologies to the market, contact Dr Umeshree Govender (govenderu@ukzn.ac.za).