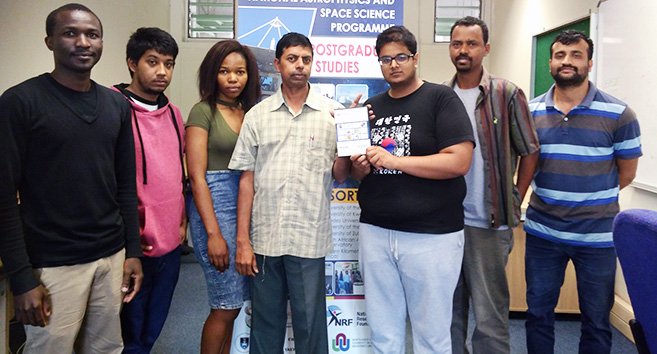 Venkataraman won the prize while visiting the South African Institute of Physics (SAIP) at the NASSP exhibition.

Venkataraman discussed BST’s products with the company, including their Origin software, which has been used by UKZN’s Atmospheric Research Team (ATMRES) for a number of years. He later went on to win the BST competition being held at the exhibition.

Origin software is used in a research environment for analysing data and plotting graphs in various dimensions.

Venkataraman’s research group, which used the earlier Version six, is pleased to now have the newer version with enhanced capabilities at their disposal. The software will soon be installed on the laboratory computer for use by researchers in his laboratory.

ATMRES is building a framework of international collaborations and research networks to assist in enhancing global change, and atmospheric and climatic research. It focuses on the systematic monitoring of the atmospheric structure, dynamics and composition using satellite and surface observations, especially in the context of the climatic impact due to land use change resulting in increased aerosol burdens. This research is important in southern Africa and its neighbouring oceanic regions as global climate change impacts increase and certainty about this change is needed. This can only be achieved with the necessary data, which is lacking in these regions.