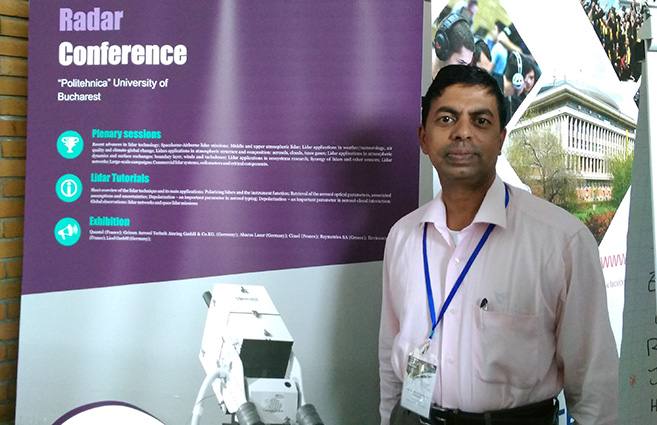 The head of the Atmospheric Research Group on the Westville campus, Professor Sivakumar Venkataraman, delivered a paper at the 28th International Laser Radar (LiDAR) Conference (ILRC) in Romania.

Venkataraman, who received travel cost assistance from the International Coordination Group for Laser Atmospheric Studies (ICLAS), was among 350 delegates from more than 30 countries at the conference.

Venkataraman said his presence at the conference was in support of his efforts to establish the South Africa – Japan bilateral research collaboration and the extended LiDAR network with South America for atmospheric studies.

For more than 50 years the ILRC has been the largest forum for exchanging ideas, fostering collaborations, and reporting innovative research on Lidar techniques, technologies and applications. Organised under the auspices of ICLAS, the biennial conference has promoted generations of scientists and stimulated the advancement of the field.

Venkataraman’ presentation was on the fixed LiDAR system at UKZN in Durban, which was installed in 1999 and operated until 2004 when the system was relocated and the operation closed due to various technical and instrument problems. The restructuring of the LiDAR system was initiated in 2013 and it is now used to measure vertical aerosol profiles from three to 25 kilometres in the atmosphere. He described the present system in detail, including technical specifications and results obtained from a recent LiDAR calibration campaign.

The fixed LiDAR system at UKZN, one of three in South Africa, is key for closing scientific gaps in the scientific knowledge of aerosols, especially in the southern hemisphere. The refurbishment of the system is still ongoing.

Venkataraman described the system’s specifications and laser emissions as well as how backscattered signals are received by telescopes and how optical fibre combiners are used for data acquisition. Plans are in place to upgrade the system for measuring temperature in the altitude range of 10 to 70 kilometres. He gave details about results of the calibration in September 2016 and indicated that the system, once restructured and optimised, will be used for long-term data acquisition in order to investigate temperature and aerosol variability over Durban.

Venkataraman acknowledged the National Research Foundation the African Laser Centre, the Centre National de la Recherché Scientifique in France, and the Directorate General for Scientific Research and Technological Development in Algeria for their funding support.