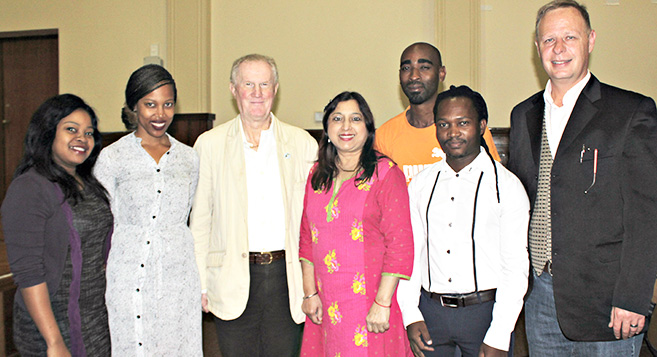 Professor Philip Stenning (third from left) with staff and postgraduate students from the Criminology and Forensic Studies discipline.

World renowned Criminologist Professor Philip Stenning gave a lecture at UKZN’s Howard College Theatre on the criminal justice system and another on the plural policing provision.

The lectures were hosted by the Criminology and Forensic Studies discipline within the School of Applied Human Sciences where Stenning is an honorary professor.

Speaking on relations between the criminal justice system and governments in Africa, he reflected on South Africa’s independence from British rule and how the constitution of the country had been shaped, while also discussing transformation and African values.

Stenning interacted with UKZN postgraduate students on the plural policing provision discussing the implications and challenges for governance and the accountability of policing. He noted that relations between police commissioners and governments in South Africa had been notoriously controversial.

‘Prior to 1994, the police were regarded by most reasonable observers as essentially an instrument of the government in oppressing Black people under the apartheid regime,’ said Stenning. ‘With liberation, the new ANC government emphasised the need for a break with the past. The idea of police independence had its place in discussions around the new constitution and the new South African Police Service Act 1995.’

He also spoke about interesting proposals that had been made in recent years by policy makers and policing scholars for mechanisms of governance and accountability for policing that would meet the challenges the pluralised provision presented.

Stenning said he hoped his lectures would allow students to be critical while striving to be agents of change for the transformation of the criminal justice system.