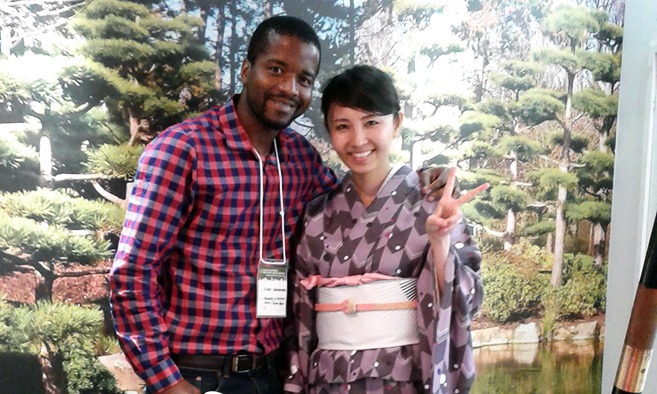 UKZN doctoral candidate in Plant Breeding, Mr Admire Shayanowako, was at the 26th Asian-Pacific Weed Science Society Conference in Japan to present results of his research on the integration of breeding and biocontrol in the control of a parasitic weed, Striga asiatica that affects the yield of maize in sub-Saharan Africa.

Shayanowako presented a section of his PhD research that involves the identification of varieties of maize resistant to Striga asiatica, commonly known as witchweed.

Two species of the Striga weed affect maize in southern Africa, with one weed plant producing as many as 500 000 seeds that remain viable in the soil for 10 years. Resulting yield losses which can be as high as 60% lead to food and income insecurity.

Shayanowako is working to identify resistance in maize that has naturally accumulated through breeding, and then boost those resistant genotypes by using a biocontrol agent called Fusarium oxysporum fsp. strigae.

‘Fusarium oxysporum is an endophytic fungus, applied as a seed coat that grows with the roots of the host and suppresses emergence of the parasite as well as causing disease symptoms on the parasite if it manages to attach,’ explained Shayanowako. ‘It is host-specific in its virulence to the parasite.’

Shayanowako added that some genotypes were more compatible with the biocontrol than others. He is working to identify genotypes that demonstrate this synergistic resistance with the biocontrol, and then increase the frequency of their resistance by recurrent selection. Resistance will mean fewer attachments of the parasite, or that the maize will tolerate attachments and still produce a high yield.

Shayanowako, supervised by Professor Hussein Shimelis and Professor Mark Laing, is conducting research in South Africa and Zimbabwe, with the aim of releasing open pollinated varieties or hybrid cultivars to farmers. He is successfully finding some local genotypes with considerable resistance that can be improved.

The presentation in Japan was well received, given the challenges of parasitic weeds affecting dominant legume crops in Asia. Responses included questions about how Shayanowako is mass-producing his biocontrol agent and how frequently resistance is being identified.

He was able to attend the conference thanks to a National Research Foundation travel grant and funding from UKZN’s Research Office. His research is supported by the Alliance for a Green Revolution in Africa (AGRA), with the International Institute of Tropical Agriculture (IITA) providing some of the germplasm for the work.

Shayanowako completed undergraduate and masters studies at the Africa University in Zimbabwe, moving to UKZN for his PhD studies after discussions with Laing about the biocontrol of parasites at the International Maize and Wheat Improvement Centre (CIMMYT) in Zimbabwe where Shayanowako worked for a while.