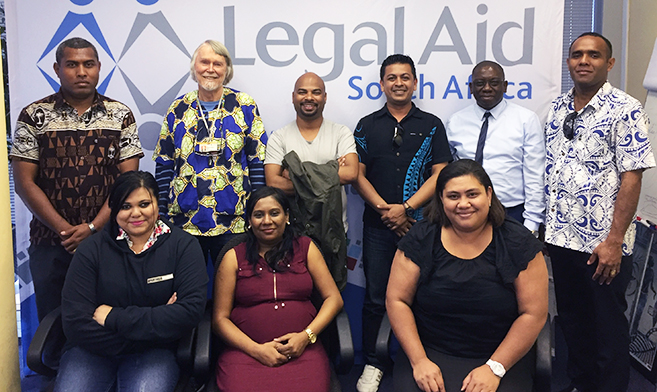 The Fijian delegation during their visit to the School of Law.

The visit was held from 12 to 26 August in Gauteng and KwaZulu-Natal. It focused on exchanges about the work of Legal Aid South Africa; the SA Human Rights Commission; a number of UKZN outreach and community service clinical law programs; and several other bodies involved in access to justice. In addition, McQuoid-Mason exposed the delegates to South Africa’s rich Liberation Struggle and ecological heritage. The seven delegates consisted of the Directors of the two Fijian Commissions and some of their senior staff.

In Gauteng, McQuoid-Mason took the delegates on a guided tour of the Constitutional Court and the Old Fort Prison – including Nelson Mandela’s cell. Thereafter, he took them to a Safari Park near Tshwane where they interacted with some of the animals as a prelude to their Game Reserve visit in KwaZulu-Natal. McQuoid-Mason also took the delegates to see the Apartheid Museum, Freedom Square in Soweto and the Nelson Mandela Statue at Union Buildings in Pretoria.

In KwaZulu-Natal, McQuoid-Mason took the delegates on a tour to PheZulu Cultural Village on Saturday 19 August, and then to Imfolozi-Hluhluwe Game Reserve and Ondini Royal Enclosure and Cultural Museum on the Sunday. The rest of the week was spent visiting the UKZN Centre for Socio-Legal Studies, the Durban Campus Law Clinic and the Street Law programme - including attending a class and observing Street Law students teaching Warwick Triangle informal traders about the law. The delegates ended their trip the following Saturday with a visit to Ms Ela Gandhi and the Gandhi Settlement when en route to the Airport. An outcome of the visit to UKZN was that one of the delegates expressed interest in undertaking a PhD programme at the University and two were interested in registering for LLM degrees.