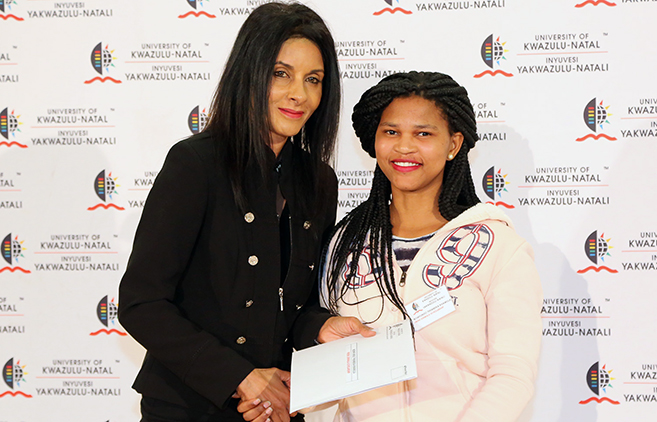 Overcoming the hardships of losing both parents at an early age and having to live off and share the little amount of foster care grant with her siblings, makes being awarded the Frene Ginwala Scholarship a bittersweet achievement for Bachelor of Commerce student, Ms Nomfundo Khawula.

Khawula, who hails from Durban’s Umlazi Township, had always dreamed of making a success of her life and improving the unfavourable living conditions at home.

‘Receiving the scholarship means success. I came with nothing to university but my potential and hard work made me pull through and succeed’, said Khawula. She believes that the scholarship will be helpful in terms of purchasing her prescribed books and also relieve the financial burden of paying for her tuition fees.

Khawula, who matriculated in 2016 from Embizweni High School, a disadvantaged school in Umlazi, was recognised for her outstanding performance at an awards function hosted by eThekwini Mayor Cllr Zandile Gumede at the Durban ICC in January this year after obtaining six A’s and was ranked second in the Top Ten achievers from disadvantaged schools.

‘I was very happy to see my hard work being appreciated especially by the eThekwini Mayor and all other Department of Education executives.’

Looking to the future, Khawula dreams of becoming a Financial Director and businesswoman so as to improve her family’s living conditions as well as contribute to improving the country’s unemployment rate.

‘My mission is to change the unfavourable situation at home and in my community and to act as a role model to the young ones and show them that all is possible through hard work and commitment. I want to be the first graduate in my family and to be a well-known businesswoman in South Africa’, she said.