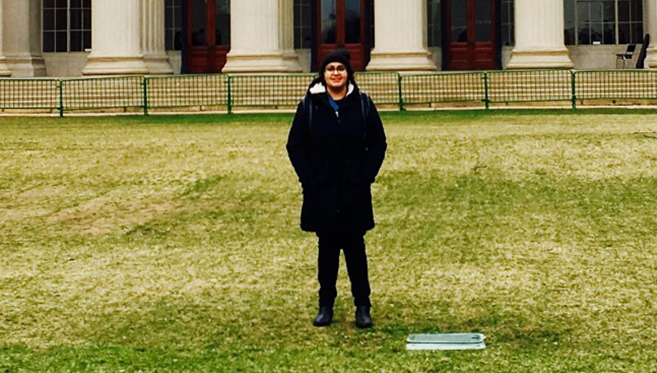 Ms Zahra Essack outside the Massachusetts Institute of Technology in Cambridge, USA.

The accolades keep rolling in for top-performing Master’s student, Ms Zahra Essack, who was recently awarded the Vincent Maphai Scholarship.

The Scholarship, named after the first University of KwaZulu-Natal (UKZN) Chair of Council, was awarded to Essack for being the top-ranked Masters student at the University.

She has also been awarded the Massachusetts Institute of Technology (MIT) Presidential Fellowship and will be pursuing her PhD in Planetary Sciences at MIT in the US, starting this September.

Essack expressed gratitude for the scholarship, saying:   ‘It is a particular honour to be associated with such a prestigious scholarship and to have my postgraduate work recognised.’

She acknowledged the dedicated academic staff in the School of Chemistry and Physics and the School of Mathematics, Statistics and Computer Science. ‘I have been fortunate to learn from and work with world-class researchers, who have inspired me and helped me to grow as a scientist and a researcher.’

Essack’s fascination with planets started from an early age after watching “The Universe”, a TV documentary series which explored planets in the solar system.

Her interest in exoplanets, chemistry and physics led her to register for a Bachelor of Science (BSc) degree in the College of Agriculture, Engineering and Science at UKZN after she matriculated from Westville Girls’ High School in 2012.

‘Studying toward my Honours degree was a challenging and rewarding experience, combining taking courses in all areas of physics as well as undertaking research that follows strict academic protocol,’ said Essack. ‘I came away from my degree more knowledgeable in all areas of physics.  Moreover, my chosen research area (exoplanets) had prepared me for my future research career.’

Professor Mark Tame (Associate Professor, School of Chemistry and Physics) said: ‘I am very pleased to hear that Zahra has been given the Vincent Maphai Scholarship award. Indeed, she will soon be starting her PhD studies at MIT in US, a fitting place for her to develop further intellectually and learn from some of the best scientific researchers in the world.’

Professor Kavilan Moodley (Course Co-ordinator, Astrophysics and Cosmology Research Unit) said: ‘Zahra performed exceptionally well in her Honours degree and is currently completing her Masters degree. She has an extremely bright research career ahead of her.’

Dr Cynthia Chiang (Senior Lecturer, School of Mathematics, Statistics and Computer Science) said: ‘We in the Astrophysics and Cosmology Research Unit are extremely proud of Zahra for all that she has accomplished.  Her relentless curiosity about the natural world will be an inspiration to others as she continues to advance her studies.’