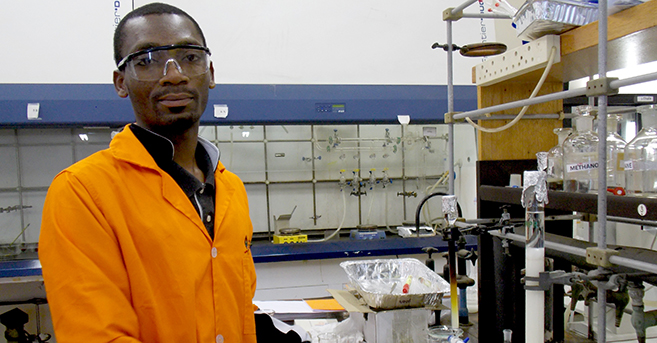 Mr Nasir Tajuddeen has been awarded the UKZN Doctoral Research Scholarship, one of the University’s most prestigious awards to students at senior postgraduate level. The scholarship is awarded annually to a maximum of four top PhD candidates at the University.

Tajuddeen is a chemist, pursuing his innovative PhD studies on the topic of antimalarial agents derived from South African medicinal plants. Continuing the tradition that saw two of the most effective treatments for the disease, quinine and artemisinin, derived from South American and Chinese plants respectively, Tajuddeen is  working to isolate antimalarial agents from South African medicinal plants traditionally used for treating malaria.

Once these agents are isolated, Tajuddeen will modify the compounds by chemical reaction for improved efficacy. This is becoming increasingly important as cases of drug-resistant malaria parasites arise. Africa carries a disproportionately high share of the global malaria burden yet is the only affected region that has not contributed to the drug pool.

Tajuddeen, who studied his BSc and MSc at Ahmadu Bello University (ABU) in Nigeria before coming to UKZN, was drawn to this institution by the work being done in this field by UKZN researchers like his supervisor Professor Fanie van Heerden, and was impressed by the calibre of the alumni he met. He always had a natural proclivity for chemistry and found himself fitting into the field naturally when enrolled in the programme as his second choice.

An aspiring academic, Tajuddeen hopes to be able to contribute to the identification and isolation of compounds with the potential to be used in the treatment of the life-threatening disease. He also hopes that his work will lead to advancement in the academic sphere through high-level publications and aims to teach in a university environment one day thanks to the example set by his role models.

Tajuddeen said he felt humbled and elated to be selected as a recipient of this scholarship having made it through a rigorous selection process.

Tajuddeen expressed his gratitude to his instructors at ABU for preparing him for the challenges of rigorous academic work, especially Aliyu M Musa, and colleagues and friends MB Isah and Dr MA Ibrahim, who facilitated his coming to UKZN. He also thanked van Herdeen for all the knowledge and experience he is gaining from her daily.