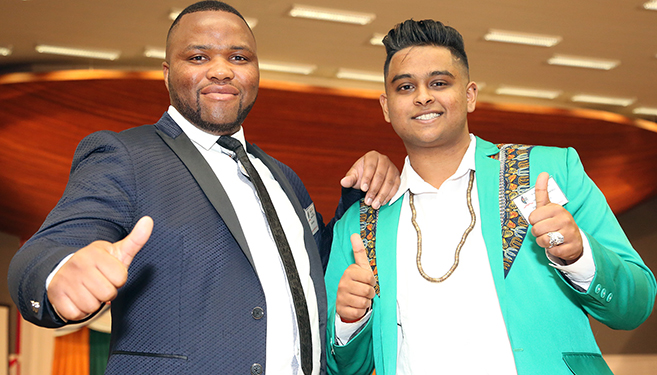 Mr Sivashen Reddy, a Computer Science Honours student, is one of two recipients of the UKZN Distinguished Student Award for 2018.  The other is Mr Sizwe Sidaza of the School of Social Sciences.

‘I am exultant,’ said Reddy.

The award recognises and rewards students with outstanding academic achievement who have also shown excellence in community engagement or exceptional University service.

Two awards are made each year to the most talented, caring and exceptional graduates and young leaders from final year undergraduate or honours level who have distinguished themselves and been judged as being most exemplary in embodying the ideals and attributes that the University seeks to create in every graduate.

Reddy was recognised for his leadership qualities, and his strong service ethic. He has been Vice-President of the Golden Key Society at the Westville campus, and received the society’s New Chapter award in 2015. He has also gained recognition at UKZN, receiving several Dean’s Commendations and being named as one of the university’s top 40 most inspiring students. He has received both entrance and merit scholarships from UKZN, and outside of the university, has also tutored Grade 10 students in mathematics.

According to Reddy, receiving this award is an acknowledgement of the 100% effort he puts into his studies.

Reddy attended Kharwastan Secondary School in Durban, where he regularly came top in various subjects. It was at the school that he discovered computer science while investigating information technology.

‘I was always attracted to how things work, and the amazing graphics and development of games fascinated me,’ said Reddy.

He dedicated his achievement to his family and thanked them for their support.  He quoted Sri Sathya Sai Baba as an inspiration for his views on education:

‘Education confers humility, endows one with the authority to command, that will entitle one to affluence. With the help of charity and compassion this affluence can be made fruitful, and by this means, happiness in this world and peace in the next can be won.’