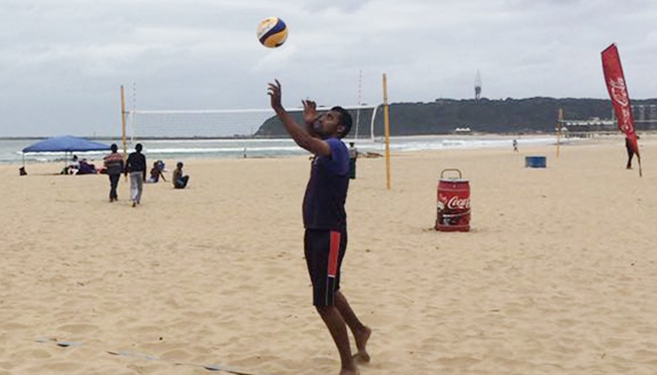 Sportsman Doubles as a Scientist

As a sportsman who is into science, Mr Brandon Govender is a rare hybrid of nerd and athlete who has created a synergy that serves both passions. He has managed to use his talent for volleyball to open doors to a career in Biology; therefore bridging the gap between sports and science.

Govender is the recipient of a UKZN Prestige Sports Scholarship for his outstanding achievement in volleyball. He has played at provincial and national levels but considers his selection to the SA U23 volleyball team as a career highlight.  He has also helped the University to win two bronze, one silver and a gold medal at University Sports South Africa (USSA) tournaments.

He decided to use his scholarship to pursue a Bachelor of Science degree in the College of Agriculture, Engineering, and Science. He is currently majoring in Genetics and Cellular Biology and attributes his passion for science to the TV show, “Crime Scene Investigation (CSI)”. He plans to get a PhD one day and wants to specialise in Down Syndrome research.

Govender is grateful for his scholarship and acknowledges it as a blessing. ‘This scholarship means the world to my family and I as it saved us a lot of financial stress. I cannot express how thankful I am for this opportunity,’ he said.

Students like Govender don’t get to where they are without focus and drive. He acknowledges his parents’ tough love and no-nonsense attitude as the reason he never strayed from his path. He admits that University has pushed him to work harder, and therefore given the power to turn back the hands of time, he would tell his younger self to work harder at school. ‘Now that I am studying at University, high school seems like nothing,’ he quipped.

Like Mahatma Gandhi, Govender feels that being a change agent is the key to Inspiring Greatness. ‘You might just affect others to change as well,’ he said. He hopes that his story of using his talent to follow his passion will inspire others to do the same.

We asked Govender a few questions to learn more about him and his personality:

Q. What is your guilty pleasure?

A. Playing other sports. Spending time with friends and fishing.

Q. What was the last thing you Googled?

A. Ocean tides – for a fishing trip.

Q. Do you have any hidden talents?

A. I play piano, sing and did I mention than I’m a skilled fisherman

Q. What is the most used App on your phone?

Q. What song is your current “jam”?

A. “Something just like this” by The Chainsmokers featuring Coldplay.

Q. What is your fondest childhood memory?

A. Watching a lunar eclipse.