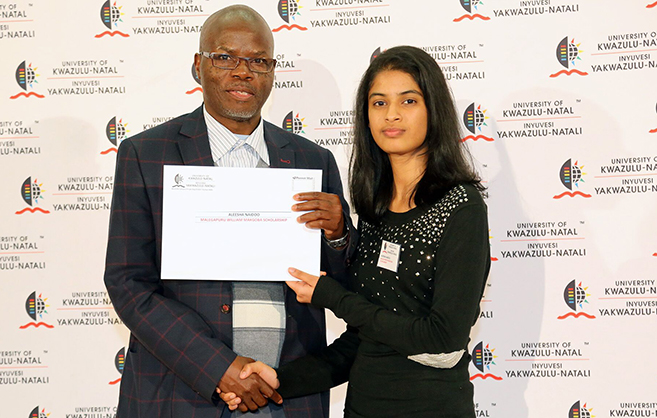 Ms Aleesha Naidoo, a second year BSc student in Industrial and Applied Biotechnology at UKZN’s Pietermaritzburg campus, is one of the recipients of the Malegapuru William Makgoba Scholarship, awarded annually to the top five undergraduates proceeding from first to second year of study in each of the University’s four Colleges.

Naidoo has nurtured a lifelong fascination with science and the intricacies of biological processes. She was drawn to UKZN thanks to its reputation as a well-accredited institution. Having also been inspired by the many luminaries that have graced the University’s halls, she aims to follow in their footsteps and if possible, do even better.

She was ecstatic after being awarded the scholarship, never having imagined it. Naidoo says that the innovative subjects she is studying provide a wide range of fields of study and she enjoys the challenges they present, allowing her to get involved in a hands-on manner and keeping her mind engaged.

What keeps Naidoo motivated is the knowledge that she is blazing a trail for her own future. Excelling in her studies also provides a great sense of satisfaction and Naidoo says as a competitive person she is always striving to break her own records.

It’s not all work and no play for the studious Naidoo; she is an avid gaming fanatic, finding the world of gaming a great stress-reliever.  She is also a keen swimmer.

Naidoo hopes to pursue a career in biotechnological and genetic research.  ‘I want to be part of activities aimed at research toward the curing of illnesses and production of medication that will help with this,’ said Naidoo.

She credited her family, particularly her mother, for encouraging her to strive for success and to remain focused on her goals. It is this unswerving focus that she says is key for success in one’s studies.

‘Always set goals for yourself and try your best never to give in to things that will pose a distraction to your studies, no matter how tempting,’ advised Naidoo.