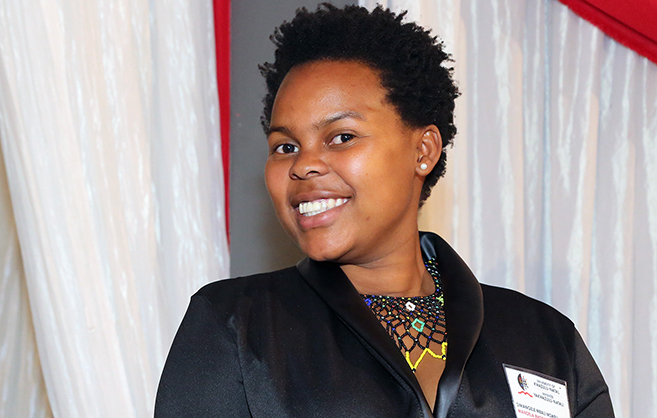 Ms Simangele Msweli is the recipient of the Mandela Rhodes Scholarship.

Ms Simangele Msweli is the recipient of a Mandela Rhodes Scholarship for academic excellence and leadership.

The Masters candidate in the School of Life Sciences is conducting research on the topic of ecological facilitation in two similar-looking indigenous plants (Sabea grandis and Thunbergia atriplicifolia) that often coexist in South African grasslands. Her supervisor is Professor Steven Johnson. Once she has completed her Masters, Msweli plans to pursue PhD studies.

Msweli has harboured an interest in the natural world since childhood, having grown up close to the isiMangaliso Wetland Park (IWP). Msweli received a bursary from the IWP for her undergraduate studies at UKZN. Since joining the University she has participated in the Golden Key International Honour Society International Summit 2015 in Australia, the 2016 Tropical Biology Association fieldwork course in Uganda, the 2017 Student Conference on Conservation Science in the United Kingdom, and the 2017 International Botanical Congress in China.

Apart from dedicating her life to the natural world through research, she is also committed to contributing in the policy-making process, and to paving the way for other young people to do so.

‘Given the history of conservation in South Africa, conservation should not be prioritised at the expense of human rights,’ said Msweli.

She has participated in the United Nations Convention on Biological Diversity (UN CBD) as a youth delegate in India (2012) and Mexico (2016). She recently assisted the Global Youth Biodiversity Network team in preparing and facilitating the African youth capacity-building workshop, hosted in South Africa, to enhance young people’s understanding of the CBD process and the use of documents as tools to influence change.

During her studies, Msweli was part of the Golden Key Honour Society for over three years, serving as President for the UKZN Pietermaritzburg committee in 2015 and Service Director in 2014. She was also involved in the Black Management Forum in 2015. Currently, she is part of the executive board of the South African Youth Climate Change Coalition (SAYCCC).

Msweli received an Abe Bailey travel bursary during her studies, which involved a tour of universities and institutions in the United Kingdom. This included a leadership and professional development element, leading Msweli to become more involved with community work.

Using the leadership skills and connections she has developed, Msweli has pioneered projects in the field of education in Africa. She has been involved in projects like the Uplift Youth in Africa group, founded by UKZN in June 2014, which mentors and gives academic guidance to schoolchildren across Africa.

Part of her passion for education has been encouraged by activities Msweli was able to get involved in at UKZN, including presentations at international summits, professional society conferences and courses.

‘Being part of the Mandela Rhodes Foundation has showed me the connectedness and disconnectedness of the African continent, therefore equipping me to be more effective in projects I am involved in that seek to bring a positive change in South Africa and Africa at large,’ she said.