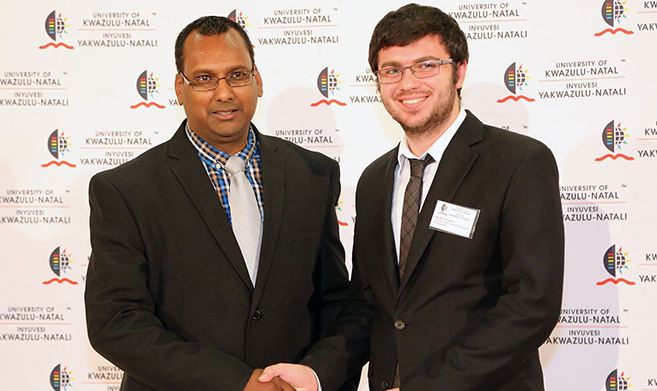 Computer Engineering Student Out in Front Once Again

Fourth-year Computer Engineering student Mr Ben Sapo has emerged victorious once again, as he has been honoured for his top academic achievements with a College Deputy Vice-Chancellor’s Scholarship.

This is not the first time he has received this accolade having received the same award last year.

The scholarship is awarded to each of the three top-ranked undergraduate students proceeding from second year to subsequent years of study within a College.  Sapo has indeed proven his dedication and academic focus.

Sapo said the scholarship had taken away the burden of paying for his fees.  ‘I feel honoured to receive this award,’ he said.

Computers have always been a passion for Sapo, but it was his brother who inspired him to pursue Computer Engineering.  ‘My brother did the (Computer Engineering) degree and I saw the really cool projects that he did, where he incorporated electronics with programming,’ he explained.

Sapo considers himself an ambitious person who always sets new goals to achieve in his work. As hardworking as Sapo is, in his spare time he likes listening to music and reading newspapers. His spriritual leader, Rabbi Schreiber is his role model because he was the person who showed him what it means to be a good person and to live a moral life.