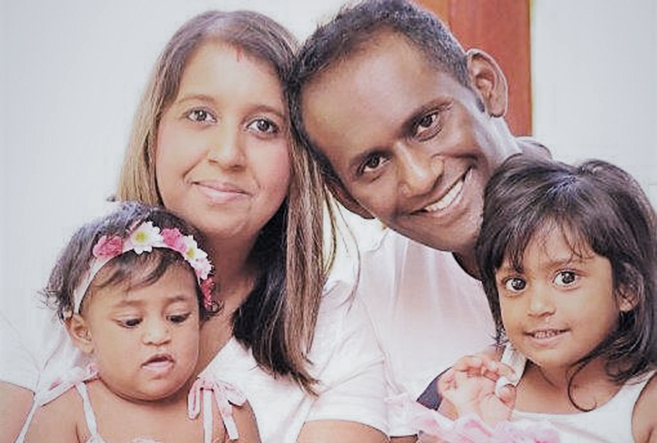 Mr Julian Palliam and his family.

School of Accounting Economics and Finance graduate Mr Julian Palliam CA (SA) has been shortlisted as one of the finalists in this year’s South African Institute of Chartered Accountants (SAICA) Top 35 under 35 competition finalists for 2017.

The Accountancy South Africa (ASA) magazine in partnership with SAICA launched this competition to recognise chartered accountants, under the age of 35, not only for their leadership ability, personal determination and drive, but also on how these exceptional individuals give back to the community and the less fortunate bringing an extraordinary balance to their professional achievements.

Palliam recalls how while growing up in Verulam, north of Durban his grandfather Mr Dawchund Jumma inspired him to pursue a Bachelor of Commerce in Accountancy degree at UKZN.

‘My grandfather had managed to obtain a Bcom degree from UKZN which was extremely rare in those days, due to the laws. He was unable to practise as a chartered accountant so he ended up becoming a head master at Natest State Aided Government School.  In some way I carry the baton forward and hopefully the next generations will do the same,’ he said.

He then moved to Eurasian Natural Resources Corporation (ENRC), a natural resources corporation where he was involved in merger and acquisition deals across Africa with the largest deal worth $1.25 billion. He then joined ABB (Asea Brown Boveri) South Africa, an automation engineering company, he was appointed as the division manager for process automation having full profit and loss responsibility and managing staff of over 150 individuals across southern Africa.

As the youngest Administrative Managing Director (AMD) in Metso Group, Palliam has now established himself at the mining equipment company Metso South Africa where he is responsible for the organisations business deals and 800 employees across the African continent.

Through Metso, Palliam is able to give back to the community by working hand in hand with SOS Children’s Village, a global organisation that focuses on poor, abandoned and orphaned children who go through parental separation, domestic violence and neglect, loss of parents due to war or natural catastrophes and children affected by incurable diseases such as HIV and AIDS.

‘The philosophy of “Pay It Forward” is that through acts of kindness among strangers, we all foster a more caring and better society thus it is essential that we give back . Together we will achieve more, and hopefully make this world a better place to live in,’ he said.

Palliam recognises and appreciates the role his family has played in supporting him and motivating him to achieve all that he has achieved at such a young age.

‘My family and I are extremely proud and humbled to be selected as a finalist in the Top 35 under 35 award. It is a great achievement to become a chartered accountant but to be recognised for your efforts is an amazing feeling. I am truly blessed to have a family that has pushed, pulled and dragged me to this achievement,’ he said.