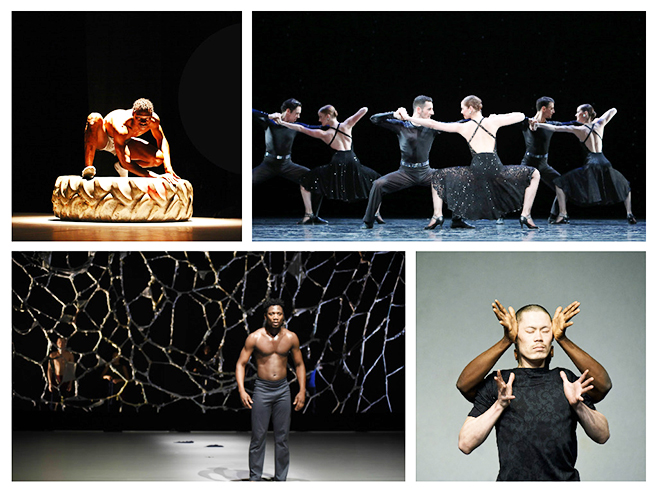 Seen are some of the artists scheduled to perform during the JOMBA! Contemporary Dance Festival.

The annual JOMBA! Contemporary Dance Experience presented by the Centre for Creative Arts (within the College of Humanities) has announced its international guests for this year’s 19th edition.

This year’s Festival, which takes place in various venues around Durban from 23 August to 3 September, promises a feast for dance and theatre lovers with a jam-packed programme featuring some of the world’s most innovative dance theatre work.

The Festival will open with a stellar international partnership with the Johannesburg-based Vuyani Dance Theatre and Germany’s steptext dance projects. In a profound meeting of Europe and Africa, choreographers Gregory Maqoma and Helge Letonja (Bremen, Germany) join forces to create “Out of Joint”.

JOMBA!’s long-term vision to honour the African continent and to continue to make artistic connection with the rest of Africa, manifests in this year’s hosting of Gbeffa.  With support from the Alliance Française (Durban), the Institut Français d’Afrique du Sud, Gbeffa will perform his acclaimed solo work “Et Si ...”

Gbeffa uses a repetition of animal movements, which he then adapts to his human dancing body before transforming the dance into involuntary and spontaneous animalistic reflexes. It is a bold and masculine work whose origins lie in the zeitgeist of West Africa.

He will also be conducting the annual Festival residency with five KwaZulu-Natal dancers: Bonwa Mbontsi, Tegan Peacock, Steven Banzoulu, Sibonelo “China” Mchunu, and Kim McCusker-Bartlett. The culmination of the residency will be shown at the KZNSA Gallery in Glenwood.

Dutch favourites, INTRODANS, join JOMBA! on a third Festival visit to offer a programme (three performances) of dance works from their award-winning repertoire. Considered one of Europe’s leading touring companies, INTRODANS works in a neo-classical ballet idiom that will delight both ballet and contemporary dance-lovers alike. They have titled their JOMBA! 2017 programme “WONDERLAND” which features a “wonderland” of works by choreographers Hans van Manen, Ton Wiggers, Cayetano Soto and Alvin Ailey’s new artistic director, Robert Battle. Their work is always witty, technically supreme and full of beauty.

INTRODANS collaborates with Durban’s FLATFOOT DANCE COMPANY in a special work that premieres at the Festival. JOMBA! has taken on the mandate to support disability dance practices in KwaZulu-Natal and has done so in a bid toward inclusivity around dance.

INTRODANS’s Artistic Manager, and celebrated Choreographer, Adriaan Luteijn will be spending three weeks in Durban working with FLATFOOT and four specially auditioned dancers with Down Syndrome to create the Durban version of “Cardiac Output”.

JOMBA! hosts its usual platforms of the Fringe (29 August) with 10 new works; the Youth Fringe (27 August), and a full programme of workshops and master classes by all of the participating dancers and choreographers.

The Festival will take place at the Pieter Scholtz Open Air Theatre on 27 August at 14h30 (free entry), KZNSA Gallery on 28 August from 18h00 (R50) and the Elizabeth Sneddon Theatre.

UKZN Drama and Performance Lecturer and Festival Director Ms Lliane Loots said, ‘JOMBA! offers a unique cultural and artistic engagement with one of South Africa’s most controversial art forms – contemporary dance! JOMBA! is one of three remaining dance festivals in our country and as such offers a unique space for Durban audiences to immerse themselves in some of the world’s finest dance offerings. The 2017 Festival is a bumper edition – book early!’

Tickets go on sale at Computicket or one hour before the performance (R60 or R45 for scholars/students/pensioners).

For a full listing of the programme and workshops go to www.cca.ukzn.ac.za.  Workshops and classes are offered free of charge (dancer over 16yrs only), booking is essential via jombafestival@gmail.com. Facebook (JOMBA! Contemporary Dance Experience) and Twitter (Twitter@Jomba_dance).

The 19th JOMBA! Contemporary Dance Experience is under the artistic direction and curatorship of Lliane Loots and is organised and hosted and run by the Centre for Creative Arts (University of KwaZulu-Natal), and is supported primarily by the eThekwini Municipality.