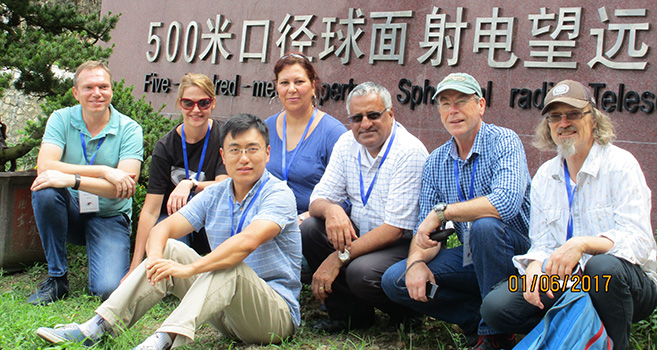 A Senior Lecturer in the School of Chemistry and Physics at UKZN and a member of the Astrophysics and Cosmology Research Unit (ACRU), Dr Yin-Zhe Ma, visited the world’s largest single-dish telescope, the Five Hundred Metre Aperture Spherical Telescope (FAST), while in China as a member of a South African delegation to the second South Africa-China bilateral workshop.

Ma delivered a presentation at the workshop titled: “How Much Cosmological Information can be Measured?”

Ma’s presentation involved querying, in the context of an era of big data coming from telescopes, whether there is an infinite amount of cosmic information that can be measured and whether the fundamental parameters of the universe that can be measured are infinitely precise. His answer involved demonstrating that the total amount of measureable information from the entire universe is finite and bounded by the structure of space-time, and that in the distant future, the microwave background radiation from the very early Universe will be lost in the thermal radiation predicted by Stephen Hawking in 1977.

The first South Africa-China Bilateral Workshop was organised in Durban in November 2016 by Ma and Professor Xuelei Chen of the National Astronomical Observatory in China (NAOC).

The latest workshop was held in June in PingTang County in the GuiZhou province of China. The meeting venue was only 20 minutes from the FAST, which comprises a fixed 500m diameter dish constructed in a natural depression in the landscape. The FAST’s five-year construction - completed in September 2016 - is currently undergoing testing and commissioning.

‘The telescope has a novel design, using an active surface for pointing and focusing, rather than only correcting residual errors, and suspending the receiver on a computer-controlled winch system without any rigid connection to the primary,’ said Ma. ‘Its observations are made at wavelengths of 10 cm to 4.3 metres.’

The Joint Centre for Computational Astrophysics, launched in December 2016 by UKZN and NAOC, has been bringing Astrophysicists from the two countries together to work on the cutting-edge of modern astrophysics through use of new observational facilities such as FAST and South Africa’s Square Kilometre Array (SKA).

UKZN Astrophysicists will be able to use the data obtained by the FAST telescope to do their research and to probe the nature of the Universe.