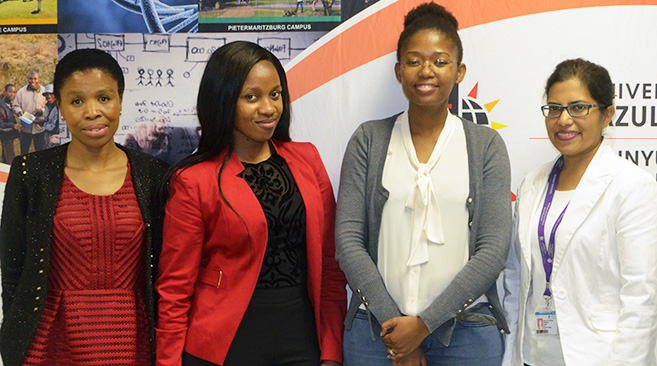 Students Encouraged to Explore Entrepreneurship as a Career

The workshop, which targeted mainly CAES postgraduate students, was co-ordinated by Dr Brenda Moodley of the School of Chemistry and Physics with the ultimate goal being to inspire students to look at entrepreneurship as an opportunity to create jobs.

The first two speakers - Ms Bathabile Mpofu and Ms Nomandla Ngcoya - are alumni of the School of Chemistry and Physics and successful entrepreneurs in their own right.

Mpofu, a UKZN Chemistry graduate and former technician from the College who founded Nkazimulo Applied Sciences (NAS) a couple of years ago with her husband, Roderick, gave a brief description of her business and the reasons for starting the company.

Mpofu, whose business is at a Power Centre in New Germany, told students her journey had been full of struggles but she pursued her dream and never gave up, emphasising that there were many funding platforms entrepreneurs could access and that students needed to start early with an entrepreneurial mindset.

Ngcoya, a UKZN Chemistry graduate who is also pursuing her PhD, founded the 100% Black-owned, Pinetown-based Dlamini Chemicals in July 2016 with Ms Lindiwe Nxele and Ms Nontobeko Dlamini.  Ngcoya spoke about creating a business that could manufacture affordable detergents to improve sanitation in townships and rural areas.

Ngcoya said starting a company required hard work, perseverance and patience. Her final words of encouragement to UKZN students were: ‘Graduates need to be risk takers and seize opportunities.’

Another speaker, Mr Deven Reddy of UKZN InQubate, gave a brief background of the services InQubate offers to both students and academics, highlighting the various projects and workshops on innovation and entrepreneurship they had hosted.

Dr Xolisa Melamane, a Portfolio Manager in the Agricultural Strategic Area at Technology Innovation Agency (TIA), told students about the various programmes TIA hosts to promote and support innovation, entrepreneurship and commericalisation. TIA is a national public entity that serves to bridge the gap between research, development and commercialisation at universities, science councils, public entities and the private sector.

The final speaker was the Manager of the Hub for the African City of the Future in the School of Engineering, Dr Rudi Kimmie, who founded the Business Organisational and Leadership Development (BOLD) organisation and the Student Entrepreneurship and Upliftment Projects (StepUp) at UKZN. He encouraged students to seize the opportunity now and not “waste time”.

Kimmie gave a member of the audience a copy of his book: MoneyWise-Essential Money Skills for Young Minds’.

‘The workshop was well attended and proved valuable as it gave students varying perspectives on entrepreneurship. We need more of these workshops for our students,’ said Kimmie.

‘The intervention by UKZN is commendable as both in South Africa and globally we are faced with shrinking economies and thus shrinking job markets. Therefore, it is important that citizens or students do not only depend on getting a job but they should look at ways to grow our economy,’ said Melamane.

Professor Neil Koorbanally of the School of Chemistry and Physics said: ‘The workshop was great.  It was good to see some of our own students involved in entrepreneurship.  Having seen what our University can produce, I am sure the graduates who attended would be inspired to start their own businesses.’

Feedback from students was also positive. Said Ms Bongiwe Mdluli: ‘Speakers at the workshop gave me a variety of options in connection with starting up a business.’  Fellow student, Ms Nyameka Vuyokazi Diko, added:  ‘It was interesting to see young women who are successful entrepreneurs.’

Necessity the Mother of Invention for Young Entrepreneur Making Science Fun for Everyone UKZN Chemistry graduate and former technician Ms Bathabile Mpofu and her husband Mr Roderick Mpofu are in the business of making science fun for young learners and students. Two years ago the couple founded Nkazimulo Applied Sciences (NAS), a business that performs science experiments at schools and provides them with ChemStart kits. Their aim is to introduce learners to the wonders of science and dispel any fears about the subject… Read more

Debonairs Pizza – Born in the USA! During a gap year in the United States, UKZN alumnus Mr Craig Mackenzie came up with the idea of establishing a pizza empire in South Africa… and so the concept for Debonairs Pizza was born!

A co-founder of the well-known South African pizza business, MacKenzie grew up on a dairy farm in Ixopo, going on to complete his high school education at Maritzburg College in Pietermaritzburg… Read more

A Passion for Engineering - How UKZN Graduate Grew His Company

A visit to an engineering business in Johannesburg sparked a young Durban man’s interest in the profession as a career leading to him eventually forming his own company and later ironically merging with the very organisation he had visited as a youngster.

Mr Trueman Tandabantu Goba, a former member of the National Planning Commission and the Executive Chairman and founder of Goba (Pty) Ltd Consulting Engineers and Project Managers, grew up in Durban’s townships during the apartheid era… Read more Behind the new, 100% Black-owned start-up company, Dlamini Chemicals, is trail-blazing Ms Nomandla Ngcoya, who was named as one of the Mail & Guardian’s Top 200 Young South Africans in Science and Technology last year.

The UKZN PhD candidate, who completed a BSc degree in Chemistry and Chemical Technology, is currently researching the synthesis, biological evaluation and molecular docking of coumarin-curcumin hybrids as well as running her business… Read more