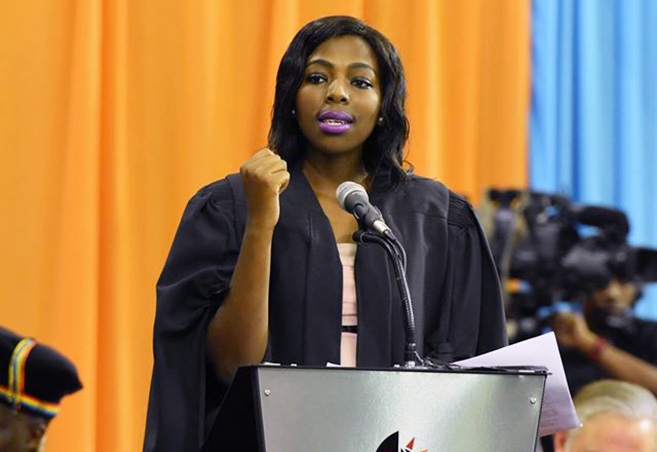 It’s Women’s Month giving UKZNdabaOnline an opportunity to highlight some of the many phenomenal women at our University.

First in the spotlight is SRC Central President 23-year-old Ms Noxolo "Knoxy" Bhengu who is in the 5th year of a Bachelor of Medicine and Bachelor of Surgery degree at UKZN’s Nelson R. Mandela School of Medicine.

Hailing from KwaSwayimane, a rural area in Pietermaritzburg, Bhengu’s leadership journey started at a very young age while she was a class prefect and representative in primary and high school. ‘When I got to Medical School I was already very vocal about students issues, this brought me closer to the SRC,’ said Bhengu.

She is inspired by her mom, Mrs Thembekile Bhengu, a single mother with no formal qualification or permanent job who raised Noxolo and her four siblings, ensuring they all received a university education. ‘She might not be educated but providing the means for an education for her children has always been her number one priority.’

Bhengu paid tribute to her mother’s strong sense of community and Ubuntu: ‘Through the little we had, I have seen my mother feeding the community and raising children we were not even related to. I live each day to be at least half the woman she is. From her I have learned the true meaning of love and resilience,’ said Bhengu.

Bhengu joined the ANC Youth League, the Young Communist League of South Africa and the South African Students Congress (SASCO) in 2012 and went on to lead these structures at branch, regional and provincial level. ‘Together under the Progressive Youth Alliance banner, those organisations have contributed immensely to my political growth and taught me the true meaning of serving.’

‘In such a male dominated sphere as politics, I am among those known to challenge the status quo and I am very vocal about the continuous suppression of females,’ said Bhengu. ‘This has made me unpopular among some which for me is no issue. Women’s struggles are very close to my heart and I shall continue until there are equal opportunities for all.’

She does not believe in standing on the sidelines pointing out what is wrong with society. ‘I play an active role through my activism and my life is thus surrounded by this. Above all, I am a feminist and my only wish is through this term of office in the SRC presidency that I am able to inspire other female leaders.’

Bhengu is looking forward to graduating with her degree in Medicine and then specialising in cardiac surgery. ‘Politics and serving is what I am mostly passionate about and I shall continue with.’