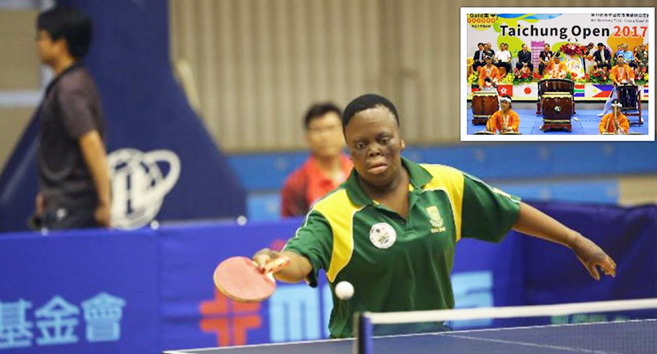 This Women’s Month, NdabaOnline is profiling some of the University’s phenomenal women. Twenty-one-year-old UKZN student Ms Sthabile Mnyandu is ranked number one in South Africa for women’s para table tennis. Mnyandu of eNdwedwe in KwaZulu-Natal was just six years old when she was burnt in a grass fire near her home.

Sthabile spent nine months in a coma after the incident and has undergone several procedures, including skin grafts on her feet and right hand.  She credits her family for their loving support through the painful surgery and therapy.

‘I also had a tissue expander for my scalp to stretch so that I can have more hair. I missed a lot of schooling but it has not affected me,’ said Mnyandu.

‘Whenever I feel depressed or looking back at what I have been through, I just call upon God because he is the reason I have made it thus far and he always protects and guides me.

‘I never feel negative about myself because I am what I am and nothing is ever gonna change that,’ she said.

Para table tennis, a growing sport in South Africa, was included in the first paralympic games in 1960. Mnyandu started playing the game in 2010 as an extra-mural activity. ‘It was just a try out and I never thought it would take me this far. I have represented South Africa twice and KwaZulu-Natal in countless tournaments.’

Highlights include playing for South Africa in Taiwan at the Taichung Table Tennis Open in July this year and getting bronze in the championships in Morocco in 2015. ‘Representing your country is the best feeling one can ever have!’

Sthabile believes that Women’s Month is about being thankful: ‘To me Women’s Month means a lot, but what is most important is remembering to honour the women who have paved the way, while not forgetting there is still a tremendous amount of work to be done in South Africa,’ she said.

She draws inspiration from a fellow para table tennis player from Bonteheuwel in Cape Town, Theo Cogill, who won gold in Taiwan and is ranked number 17 worldwide. ‘My plans for the future are to represent South Africa in as many tournaments as possible and obtain gold medals, just like Theo,’ she said.

She gets in about three training sessions a week and hopes to find table tennis partners to practice further with.

Mnyandu is also looking for a coach to help hone her skills and hopes to find a sponsor so she can participate in more tournaments.

Doing her first year of studies as part of the University’s Access Programme, she plans to specialise in architecture next year, while improving her table tennis skills and seeing the world!