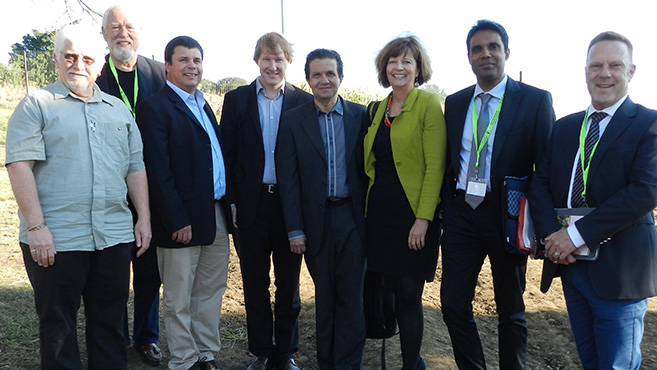 The University of KwaZulu-Natal (UKZN) recently hosted the second annual Ukulinga Howard Davis Memorial Symposium at its Ukulinga Research Farm in Pietermaritzburg. The event is a joint initiative between the Institution and the Howard Davis Farm Trust, with whom the University has a relationship stretching back to the 1930’s with the construction of Howard College. The multi-level Symposium honoured the educational legacy of the late Howard Davis, killed in 1916 in World War 1.

The Symposium was first held in 2016, bringing together stakeholders from across the agricultural industry in KwaZulu-Natal and the wider South African agricultural community, to showcase research carried out at Ukulinga.

The more than 200 attendees included students, academics, scientists, small-scale and commercial farmers, NGO representatives and more. Incorporating presenters and participants from across the University, it proved to be a multidisciplinary information-sharing gathering.

Keynote speakers at the event were Dr Dickson Despommier, Emeritus Professor at Columbia University, and Professor Ben Cousins, South African Research Chair (SARChI) in Poverty, Land and Agrarian Studies at the University of the Western Cape.

Despommier is renowned for his contributions to urban agriculture and the concept of the vertical farm to combat food insecurity issues becoming more prevalent due to urbanisation, population growth and climate change. He advocated for the creation of sustainable eco-cities to provide food security, recommending that urban agriculture be taught at agricultural institutions.

Cousins spoke about smallholder farmers and land reform in South Africa. He offered a definition of a smallholder farmer, and gave examples based on his extensive work in KwaZulu-Natal, making recommendations on how agrarian reform for “accumulation from below” could be applied.

The US Department of State’s Economic Bureau gave support to the event by bringing in two guest speakers from Brazil, Dr Francisco Aragão from Embrapa Genetic Resources and Biotechnology, and Mr Emerson Wohlenberg from SLC Agricola, in support of the USA’s global efforts to advance biotechnology. Their presentations gave insight into agricultural and biotechnology industries in Brazil.

The US Consul General, Frances Chisholm, spoke of the strong and growing partnership between the USA and South Africa in strengthening the skills and productivity of rural farmers. Chisholm advocated for the use of innovation and biotechnology in the search for solutions to food insecurity.

The Symposium explored more than just food in the theme of Food Security. It comprised presentations on a wide range of topics, including food, water and energy availability under climate change, uses of biomass, indigenous crops, vulnerability of households to food insecurity, usage of aquaponics systems, biocontrol, the development of low-cost technologies for small-scale farmers, agripreneurship, food safety for market access, and gender equality in land access.

The event included discussion panels each day, allowing delegates to engage with presenters and opening the event up to robust discussion and the sharing of ideas.

Delegates were exposed to practical elements of the farm, with a demonstration from the Animal Science steer project students on the first day and a visit to a site planted with crops by McDonald’s Seeds on the second day, as well as the opportunity to view Agricultural Engineering design projects.

The Friends of UKZN Agriculture annual Networking Function was also held as an ancillary gala event on the first night of the Symposium.

Linked to the Symposium was the annual College of Agriculture, Engineering and Science stand at the Royal Show in Pietermaritzburg, which showcased research done within SAEES in the fields of climate change and food security, as well as animal research in the School of Life Sciences. The stand once again won Gold and the trophy for the best individual stand.