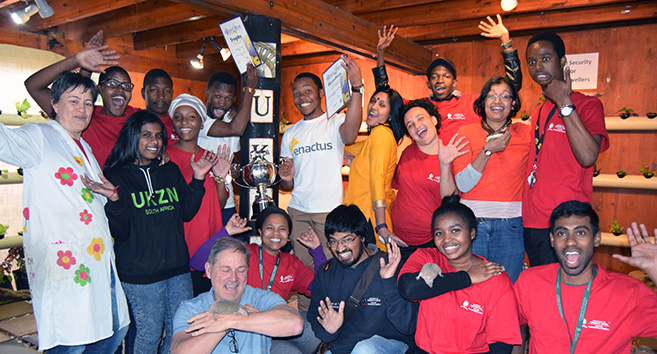 UKZN once again has won gold and the trophy for the best individual stand at the 2017 Royal Show.

Britney Spears must have had UKZN specifically in mind when she penned the lyrics for her famous song, "Oops! I did it again" -  for once again the College of Agriculture, Engineering and Science has pulled the proverbial rabbit out of the hat, winning Gold and the trophy for the best individual stand at the 2017 Royal Show.

‘UKZN rated highly in all categories, and we were particularly impressed by the enthusiasm and extra effort put in by the students and staff who manned the UKZN stand,’ said Royal Agricultural Show Manager, Terry Strachan.

‘Our win was without doubt due to both the passion and the impressive knowledge of our staff and students at the stand who went out of their way to share their expertise with the general public,’ said mastermind behind the project and Public Relations Officer for the College of Agriculture, Engineering and Science, Ms Swasti Maney.

Run in conjunction with the second Ukulinga Howard Davis Memorial Symposium, the stand showcased research done within the School of Agricultural, Earth and Environmental Sciences in the fields of climate change and food security.

To add a bit of spice and crowd attraction, the School of Life Sciences had an impressive collection of creepy crawlies on hand, including tenrecs and hissing cockroaches from Madagascar, tarantulas, and an array of boa constrictors both thick and thin.

With STEC@UKZN’s “Dr T” wowing both young and old with her magical science show, there was always a fascinated crowd on hand to learn more about what UKZN has to offer.

The College of Agriculture, Engineering and Science has exhibited at the show for several years, consistently winning prizes for its displays.

Pietermaritzburg’s Royal Agricultural Show, now in its 163rd consecutive year, is the premier agricultural and lifestyle event in the province which attracts over 180 000 people during the 10 days that it runs.