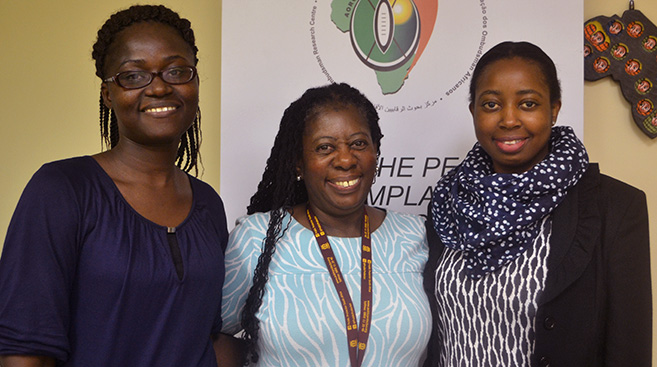 In order to unite its six regions and bring about cross-fertilisation of skills, the African Ombudsman Research Centre on the Howard College campus is currently running the first of its four-week Attachment Programme.

The aim of the current programme, which runs until 10 June, is to host two people from two of the African Ombudsman and Mediators Association (AOMA)’s regions to undertake the programme together.

This first “pilot” will also assist in determining whether the programme will be sustainable and to help generate the entrance criteria and application process for the upcoming programmes.

Director at the Centre, Advocate Arlene Brock said the goal is to have three one-month Attachment Programmes each year. Two people, from AOMA’s six regions, will undertake the Programme together.

The aims of the programme are to bring in two people to know each other personally and share ideas and notes, for the participants to share their skills with the Centre and give the Centre better feedback on what their respective offices require.

Brock said the Centre will, in turn, give them the level of experience that they might require.

Currently participating in the programme are Acting Deputy Director of Investigations in the Office of The Ombudsman of Malawi, Ms Chipiliro Leah Mangulama and Ms Hilda Ojiambo who is a Legal Officer at the Commission on Administrative Justice with the Ombudsman of Kenya.

Mangulama’s role includes investigating cases of maladministration in the Public Sector including delays in the public service delivery, abuse of power by public officers, the unfair treatment by any state organs and conducting systemic investigations into Government processes and procedure that affect large percentages of the population.

Mangulama said she loves the programme so far as she has learnt how the ombudsman in Madagascar works and has been able to compare with how the Malawi system works.  She said it is not easy to lead a team of investigators and this programme will help with leadership skills. She said she is looking forward to seeing how the newsletter is developed by AORC as the Office of the Ombudsman Malawi’s newsletter is in the process of being revamped.

‘This is the exposure that every investigator in this field needs,’ added Mangulama.

The AORC is funded from the African Renaissance Fund (ARF) of South Africa’s Department of International Relations and Cooperation.

Amongst the strategic objectives of the ARF are: cooperation between South Africa and other African countries and the promotion of democracy and good governance. AORC is mandated by both the AOMA Constitution and the AORC Board to facilitate networking, language capacity and training.

According to the AORC, the benefits for the participants include learning AORC’s materials and other resources, learning more about global Ombudsman best practices through daily discussions with the Director and any available workshops, close networking with someone from an office in a different region and learning one of the four official languages of AOMA (English, French, Portuguese, Arabic).