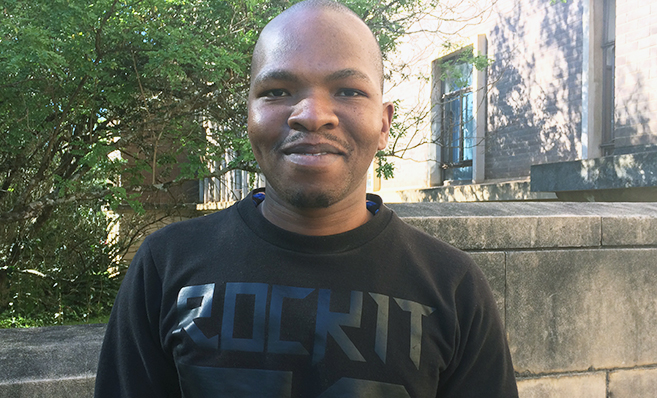 Shezi is originally from the rural KwaHlathi area near Ladysmith where subsistence farming is a widespread practice. With agriculture so dominant in his youth - his mother taught him to value what came out of the ground - he was inspired to study in the field of Agriculture.

Shezi did not meet the entry requirements for a BSc degree in Crop and Horticultural Sciences when he applied at UKZN so he did a BSc4 Foundation programme with the Centre for Science Access (CSA) with financial aid provided by the National Student Financial Aid Scheme (NSFAS).

Shezi found that being from a background with very limited resources, the BSc4 Foundation helped him move from a situation of being disadvantaged to one he considered as privileged.

Shezi pushed hard to succeed, completing his undergraduate studies and going on to honours, during which time he received the Greytown Parish Lionel Ashfield Prize, awarded to the best and most practically oriented third or fourth year student in the Discipline of Horticultural Sciences.

His experience in Horticultural Sciences sparked an interest in post-harvest technology, leading him on to a master’s degree on the topic of the effects of the supply chain routes and pre-storage treatments on the post-harvest quality of stored Nemo-netta tomatoes. Supervised by Professor Tilahun Workneh, Shezi’s research was part of work on tomatoes linking ZZ2 to small-scale farmers in Limpopo. He said that the Bioresources Engineering staff and postgraduate Energy, Food and Water Engineering Research Group provided important constructive criticism for his study.

Shezi was inspired to undertake research that feeds directly into the industry and has practical implications. He is now registered for his PhD in Horticultural Sciences.

Shezi thanked Workneh for his invaluable support, and also lecturers Professor Isa Bertling and Dr Samson Tesfay for their belief in him and their support. He hopes that by sharing his experience, he will encourage students from similar backgrounds to persevere with their studies.