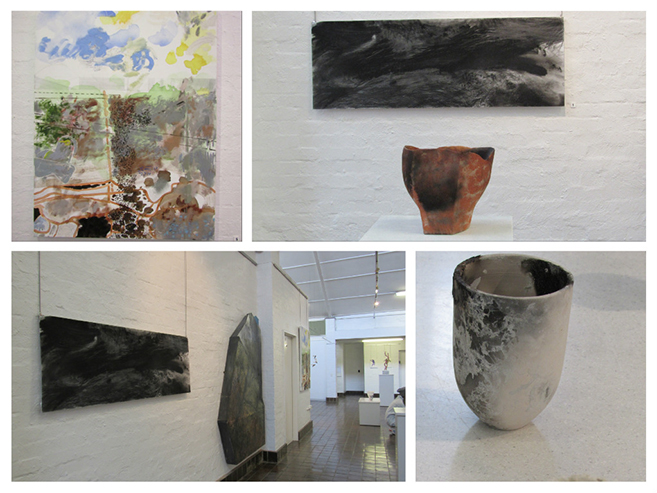 Arts lecturer Dr Jessica Draper said: ‘The Jack Heath Gallery has a long history of providing an interface between the public and the Centre for Visual Arts.  It is a space that allows us as a department to showcase the richness of the work of our student body but it also provides a platform for engagement with the broader community in which we work.’

Work in Progress aimed to reinvigorate the Jack Heath Gallery by using it as an experimental space in which visitors are invited to participate in the process of ‘meaning-making’.

‘It is hoped that the energy generated in the spaces between the artworks goes some way towards recharging the walls, and sparks interesting conversations between students, staff and the community,’ said Draper.  ‘The works on display are formative and still largely under construction.’

CVA Director Dr Louise Hall exhibited one of her artworks titled Landscape I, 2016 (mixed media on canvas) that speaks of subterranean, historical layers. It is an imaginary cross-section of land forms suggesting evidence of archaeological and engineering disruption and excavation.

‘Much of my work is about drawing and mark making,’ said Hall. ‘Recent work including this piece, explores the combination of the syntax of painting with that of drawing. Landscape I, 2016 includes an amalgam of drawing and paint media - pencil, watercolour and oil paint – each lending relative and peculiar qualities of transparency and opacity to the pictorial structure. This work does not offer a logical pictorial space - the image is simultaneously flat, transparent and spatial.’