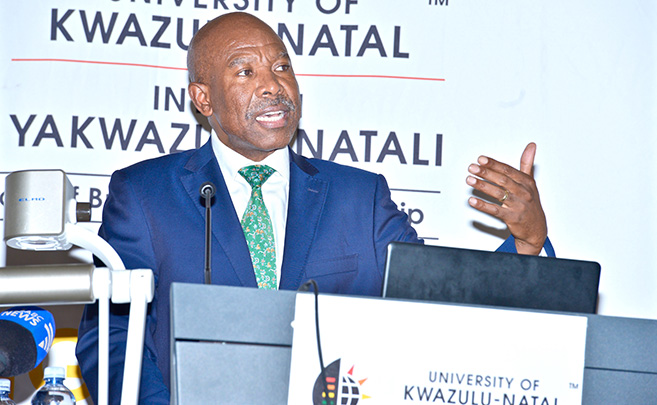 South Africa has the potential to get rid of its newly-acquired junk status so long as it deals with all the concerns of the international rating agencies, according to the Governor of the South African Reserve Bank (SARB), Mr Lesetja Kganyago.

Kganyago was speaking at a public lecture on Monetary Policy hosted by the Graduate School of Business and Leadership (GSB&L) on UKZN’s Westville campus.

Responding to a question on what junk status means for ordinary South Africans, Kganyago said: ‘Getting out of junk status is in our hands. It all depends on what we do to lift our credit standing as a country.’

He said there was no need to panic, reminding the audience that South Africa still had a good investment rating as far as domestic currency was concerned.

Elaborating on direct and indirect channels of how the rating could impact on people, Kganyago said: ‘The rise in the cost of capital could result in a situation where the cost of servicing your debt goes up and that begins to eat into your income.’

He said indirect channels involved the ‘cost of government borrowing going up. If it does, government must first pay for the cost of servicing the debt before it can pay the debit itself’. When that happens, the government’s flexibility in meeting its public service commitments was reduced because ‘the budget gets eaten’.

On South African monetary policy, Kganyago said what had paid off was the country’s aim to stabilise inflation and anchor expectations through an inflation-targeting framework while accumulating reserves to enhance its robustness to external shocks. ‘Within a few years, we closed the forward position and inflation expectations stabilised within the inflation target range. We have been benefiting from these policies ever since.’

However, he said the country had an unemployment problem which had persisted over the past two decades, justifying why it made sense to look for creative solutions to the problem.

‘The first reason for this is that almost all of South Africa’s unemployment is explained by structural factors, not the kind of cyclical factors that can be addressed by changes in interest rates. The second reason is that monetary policy is already sensitive to cyclical factors - the difference in approach between a dual-mandate central bank (like the Fed) and a more straightforward, single-mandate inflation targeter (like the SARB) is quite small,’ said Kganyago.

Dean and Head of GSB&L Professor Theuns Pelser thanked the Governor and the SARB for their efforts to protect the value of the currency. He also thanked UKZN Vice-Chancellor Dr Albert van Jaarsveld who presented the welcome; GSB&L academic Ms Nomfundo Kakaza for initiating the lecture; the director of proceedings and facilitator, Dr Joy Ndlovu, and staff and students who attended the event.