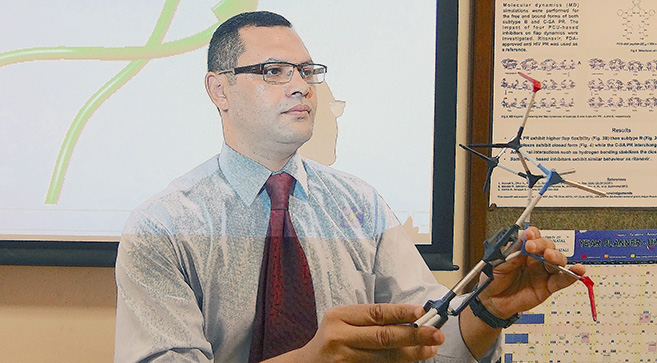 UKZN’s Dean of the School of Health Sciences, Professor Mahmoud Soliman, has been invited to serve on the editorial board of the prestigious international journal: Cell Biochemistry and Biophysics (Springer Publisher).

The journal is one of the most reputable publications in the field of Biochemistry and Biophysics with an impact factor of 1.7, indicating its strong international standing in terms of peer-reviewed articles in the field.

Soliman, who joined UKZN in 2012, has been ranked twice in UKZN’s Top 30 Researchers’ list - fifth last year and 12th in 2015.  He is a C-rated NRF scientist as well as the Editor-in-Chief of the Journal of Organic and Bimolecular Simulations (JOBS), and editor of several journals specialising in pharmaceutical chemistry and drug design. Since joining UKZN, Soliman has graduated seven PhD students and 10 master students. In the past five years, he has published more than 90 items in ISI-accredited journals.

At the relatively young age of 41, Soliman is a full Professor at UKZN after climbing the ranks swiftly through excellence in teaching and publishing a significant number of articles in peer-reviewed journals on an annual basis.

It is noteworthy that at the age of 39, he was promoted to Associate Professor level and appointed Dean of the School of Health Sciences.

Soliman completed his postgraduate studies at the University of Bath in England in 2009, earning a MPhil/PhD.  He specialised in the field of molecular modelling, computational chemistry and drug design under the supervision of Professor Ian Williams.

He is a visiting professor at Florida A&M University in the United States and an academic visitor at the University of Bath.

Originally from Egypt, Soliman is married with two young sons. His wife is currently studying at UKZN for a PhD in Pharmaceutical Sciences.

Soliman, who is regarded as a fun-loving Dean with a strong work ethic, is well known for grooming young scientists to succeed in their profession. He is currently supervising 10 PhD students and nine master’s students.

He enjoys reading, camping and is a sports fanatic, eating healthy and working out at the gym!