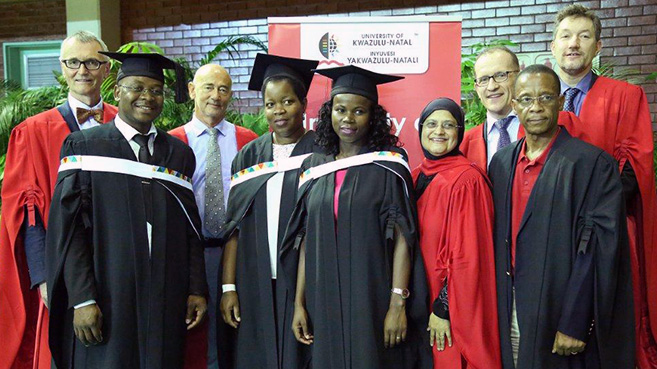 The five-year project funded by the Norwegian Agency for Development Cooperation (NORAD) seeks to strengthen health and Higher Education systems in the lower and middle income countries (LMICs) of Malawi and Mozambique with South Africa serving as the south partner and Norway the north partner.

‘The project has three phases,’ said the Principal Investigator (PI), UKZN’s Professor Sabiha Essack who is the South African Chair in Antibiotic Resistance and One Health.

‘It results from selection pressure because of the indiscriminate use of antibiotics in humans and food animals,’ said Essack.

The first three graduates in the programme conducted their research under the supervision of Essack, Dr Tomas Zimba, Professor Arnfinn Sundsfjord and Professor Gunnar Simonsen:

•   Estavela examined Extended-Spectrum ß-Lactamase and Plasmid-Mediated AmpC Resistance in Clinical Isolates of E. coli at the Central Hospital of Maputo

•   Lino Faife delineated Resistance to ß-Lactam and Fluoroquinolone Antibiotics in Enterobacteriaceae from Chicken Reared in Brazil, Mozambique and South Africa

The Graduation ceremony was preceded by a symposium at which Sundsfjord – the Norwegian Principal Investigator - presented a keynote address on Challenges and Solutions to Antimicrobial Resistance.