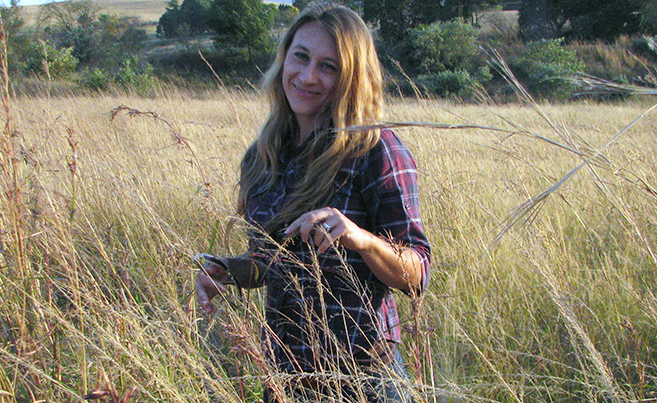 Dr Yvette Ehlers Smith was awarded her PhD in Ecological Sciences for research on the impact of changing land use on biodiversity.

The impact of changing land use on biodiversity, particularly of mammals, was the subject of research by PhD graduate, Dr Yvette Ehlers Smith.

Ehlers Smith, who featured on 50/50 discussing one of the animals from her study, the Blue Duiker, hopes her work will contribute to increased human action in preserving dwindling forest habitats that are home to a multitude of species. These natural habitats have become increasingly fragmented owing to urbanisation, forestry and agriculture, forcing mammals to adapt to life with humans, leading to a shift in behaviour patterns, such as increased activity at night.

Growing up in South Africa made Ehlers Smith realise the importance of protecting wildlife and motivated her to pursue a career path that would help her contribute to conservation. She lived and worked in the United Kingdom and Indonesia for 14 years, saving up and relying on student loans to attend university in England. She completed her undergraduate and Honours degrees in Environmental Science at Oxford Brookes University, and her Master’s degree in Biodiversity and Conservation at the University of Exeter.

Through her research, Ehlers Smith highlighted important habitat patches that may be considered regenerating forests, which play a crucial role in buffering forest communities. ‘Through the protection of these habitat patches on private and municipal land, we can secure the future of communities (plants, birds and mammals) that exist within the patchily distributed, critically endangered forest habitats of KwaZulu-Natal,’ said Ehlers Smith.

She also spoke about the threats forest animals face, including snares, poaching, traffic collisions, dog hunting and attacks by pets. Additionally, their natural forest habitat is degraded and altered by human activities.

Part of her studies has involved examining the positive effects conservancies and eco-estates could have on these species as forests are rehabilitated.

Ehlers Smith wants to do further research in KwaZulu-Natal, working with rural communities to protect endangered and culturally important species.

She thanked her parents for exposing her to the natural world at every opportunity and her husband for taking her to wild, unspoiled locations and providing the inspiration she needed to follow her dreams. Ehlers Smith also credited her supervisor, Professor Colleen Downs, for providing the opportunity and platform to conduct her PhD research so successfully.