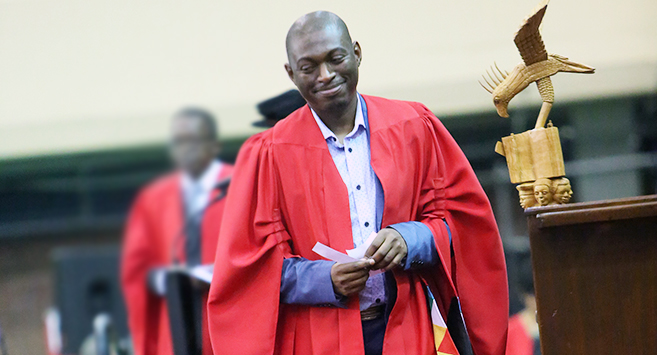 Ngcobo’s study provided evidence that traditional medicines can modulate the immune response in a laboratory setting and in bacteria-infected animal models.

‘This study could have implications for the treatment of immune-related diseases such as cancer and tuberculosis,’ said Ngcobo. Supervised by Professor Nceba Gqaleni, the study has resulted in at least six articles being published in national and international peer-reviewed journals.

The majority of these products are not owned by traditional healers,’ said Ngcobo.

He says strengthening the immune system through various medicinal interventions is very important in the African traditional healing philosophy.

Titled: "Evaluation of Immunomodulatory Mechanisms of South African Traditional Medicines Using in vitro and in vivo models”, the theses aimed to comparatively evaluate the biochemical immunomodulatory effects of the commercial immune booster, uMakhonya®, and a traditional energy tonic prepared by a traditional healer using in vitro models, with the ultimate aim of studying one of these products using an in vivo model.

‘In the in vitro phase comparative studies on the effects of the uMakhonya® and the traditional energy tonic were undertaken,’ said Ngcobo. ‘These included immune toxicology, genotoxicology, free radical scavenging, lipid peroxidation, secretion of inflammatory cytokines, secretion of chemokines, chemotaxis, levels of soluble interleukin 2 receptors, and transcriptional activity of NF-?ß in PBMCs from normal human blood and THP-1 monocytes.’

‘The results in various models of PBMCs showed that uMakhonya® can induce both pro-inflammatory and anti-inflammatory effects depending on the initial stimuli applied to immune cells. However, the traditional energy tonic doses showed better toxicological and immune stimulating profiles in all three models of PBMCs,’ said Ngcobo.

According to Ngcobo the traditional energy tonic did not show any toxicity in rats at 2 000 mg/mL/kg body weight and modulated the immune response of rat models infected with S. aureus.

According to Ngcobo, further studies on other animal models were necessary to further understand the energy stimulating and possible antimicrobial effects of this traditional energy tonic.

Ngcobo is also involved in a number of research related projects and is advocating for better basic education for township schools. ‘Seeing people succeed in doing good things is the most satisfying thing to witness and that motivates me to want to do the same and more,’ declared Ngcobo.

He has five siblings. ‘We were fortunate that our parents valued education so much that all of us went to school despite very tight finances. My family is proud of me and hopefully our next generation will go on to achieve bigger and better things.’