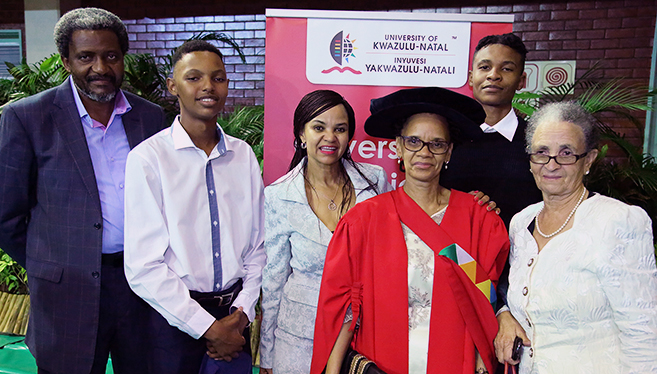 Celebrating with the HOD of Obstetrics and Gynaecology, Dr Sebitloane, is her proud family.

Titled: “Maternal Complications in HIV-Infected Women Receiving Combination Antiretroviral Treatment in a Resource Constraint Setting”, the study aimed to determine maternal and obstetric outcomes of women receiving HAART before and during pregnancy.

It also aimed to describe the clinical outcomes as well as the immunological and cytokine changes according to the duration of HAART.

‘My thesis showed residual increased risk of medical and obstetric complications in pregnant women receiving HAART,’ said Sebitloane. ‘This is in the background of a predominantly pro-inflammatory cytokine profile, which can be dampened with the use of HAART. The latter, however, also suppresses the preferable Th2 cytokines, identified in most normal pregnancies.’

‘The cytokine expression of women on prolonged HAART indicates a Th2 to Th1 cytokine profile shift which may be related to adverse pregnancy outcomes such as preterm delivery demonstrated in the audit or increased risk of HDP seen in both the audit and the secondary analysis.’

She said the predominantly pro-inflammatory cytokine profile of HIV negative controls and women treated with HAART initiated during pregnancy may reflect the background or residual increased risk of infectious complications in our resource constrained setting.

‘The thesis described residual infectious morbidity despite the use of HAART but in addition, unmasked how some of the obstetric conditions are possibly worsened in the presence of HAART.

Sebitloane, who believes her thesis serves as one of the first alerts to increase awareness regarding the care of pregnant women, plans to do a follow up on the women in order to make an association between the laboratory findings and clinical outcomes. She is currently supervising several masters students, ‘looking closely at the clinical outcomes of interest and associations with use of HAART’.

Sebitloane, married with two sons, is grateful to her family for their support. She is also thankful to the ‘Lord Almighty’ for the space she finds herself in now, ‘It’s been a long and arduous journey, but the Lord has been my strength.

‘My family is very proud of my achievements, and I believe the boys are greatly inspired, having seen all the toiling and eventually the desired outcome. My greatest pleasure would be to see that my hard work has positively impacted their attitude towards life.’