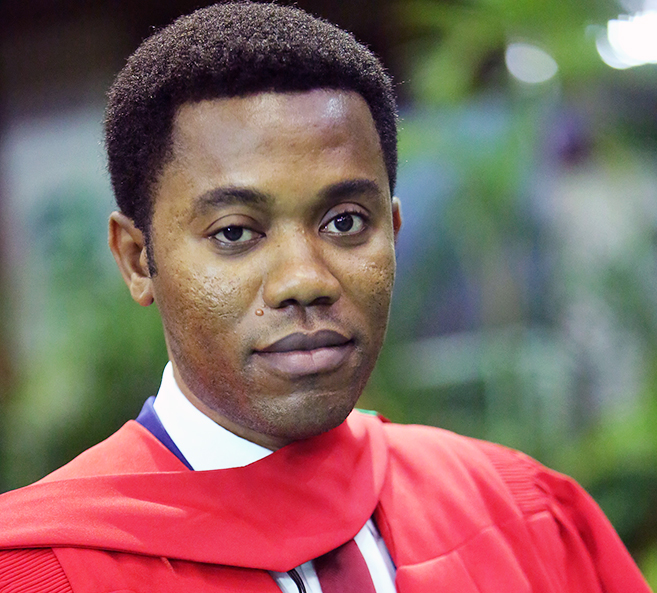 Graduating with a PhD is Dr Osaretin Emmanuel Asowata.

Nigerian-born Dr Osaretin Emmanuel Asowata, a post-doctoral Research Fellow in the School of Laboratory Medicine and Medical Sciences at the Nelson R Mandela School of Medicine, has graduated with a PhD in Medical Microbiology.

His research focused on factors influencing the effectiveness of a monovalent rotavirus vaccine among children five years and under in KwaZulu-Natal.

The project was part of a bigger diarrhoeal project investigating the aetiologies of diarrhoea among infants and young children.

‘I chose this area of research because preliminary outbreak data showed that Rotavirus was responsible for more than 50% of these diarrhoeal cases and the rotavirus vaccination coverage in KwaZulu-Natal was more than 90%,’ said Asowata.

Rotavirus post-vaccination effective studies have been done in Africa, however, only one such rotavirus study has been reported in South Africa.

Asowata’s study reported for the first time the effect of rotavirus specific immunoglobulin G (IgG) avidity and sub-optimal vaccine storage temperature on the effectiveness of the monovalent Rotavirus vaccine.

This study revealed that genetic diversity of rotaviruses and poor immunogenicity of this monovalent rotavirus vaccine are possible factors influencing the effectiveness of this vaccine. In addition, findings from this study revealed that the Rotarix® vaccine is highly potent and fit for use in low income settings, including in KwaZulu-Natal, because the vaccine potency was maintained even after exposure to sub-optimal temperature. However, reasons for the maintained potency after vaccines exposure to these sub-optimal temperatures are still unknown.

Asowata said the benefits of this study were that it would give parents, especially nursing mothers, a better understanding of the importance of the rotavirus vaccination exercise; enlighten people that the vaccine was only developed to protect against rotavirus associated with diarrhoeal hospitalisation and not all diarrhoea; and to educate society that not all infections are vaccine preventable. ‘In addition, this study revealed that the rotavirus vaccine effectiveness is low in KwaZulu-Natal and other low income settings in comparison to the higher vaccine effectiveness observed in the high income settings.’

Asowata completed his Bachelor of Science honours degree and Master’s degree in Microbiology at the University of Lagos after which he applied to do his doctorate at UKZN’s School of Laboratory Medicine and Medical Sciences.

He was awarded a travel fellowship by the Bill & Melinda Gates Foundation to present some of his doctoral research findings at the 12th International Double Stranded RNA Virus Symposium in India in October 2015.  Asowata also presented at the 6th Federation of Infectious Diseases Societies of Southern Africa (FIDSSA) congress in South Africa in November 2015.

After completing his PhD, he got a global health travel scholarship to present a poster at a keystone symposium titled: “Translational Vaccinology for Global Health in London”.

He spends a lot of time doing research but also enjoys cooking, travelling and surfing the internet.