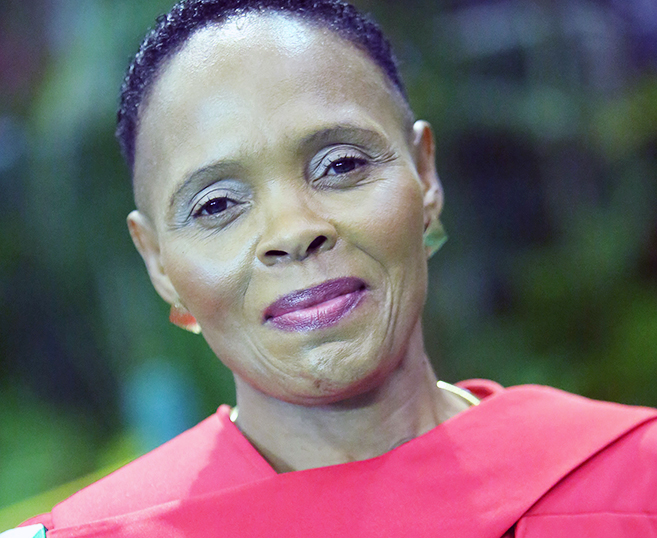 A lack of knowledge about HIV and homes without a “father figure” put young girls in KwaZulu-Natal at a higher risk of contracting cervical cancer, according to a UKZN researcher.

The PhD study by Dr Joyce Nonhlanhla Mbatha on HIV-infected and uninfected young girls is believed to be the first such community-based investigation involving high school girls in KwaZulu-Natal.

Mbatha graduated with a doctorate in Medical Microbiology for her work titled: “Genotyping, Clearance and Persistence of High-Risk Human Papillomavirus (HPV) and Evaluation of Self-Sampling Techniques in HIV-Infected and Uninfected Young Women in Selected Regions of KwaZulu-Natal”.

Mbatha enrolled teenage girls as participants in her study because of the South African Government Initiative in which human papillomavirus (HPV) vaccine is administered to school-going girls to protect them against cervical cancer.

She then identified a need to describe high-risk HPV genotypes circulating in KwaZulu-Natal in order for locals to have an idea of what they were faced with. ‘Research on HPV is sparse in KZN - most HPV research has been conducted in the Western Cape and Gauteng. Another reason for involving young women in this research was to create some awareness about the causal relationship between HPV and cervical cancer as well as that of HPV vaccine,’ Mbatha explained.

A finding from the study recommends the introduction of education in schools on HPV and cervical cancer. Also mentioned was how the absence of a father figure in the home can affect a girl’s behaviour and plays a role in girls being exposed to the dangers of cervical cancer.

Mbatha has supervised three masters students to graduation and is currently supervising two masters students at DUT. She has led the curriculum development of a new degree - Bachelor of Health Sciences in Medical Laboratory Science - which has been approved by the Council for Higher Education (CHE) to start at DUT next year.

‘I feel a great sense of confidence and excitement that I finished what I started,’ said Mbatha. ‘I now aim to further my research. When I first registered for my PhD, I was going through a very challenging period but gained strength from God and from the support I received from my family, friends and most importantly from my supervisors and project leaders.

Mbatha, who grew up in Empangeni and has three children and two grandchildren, loves the outdoor life and spending time with her family.