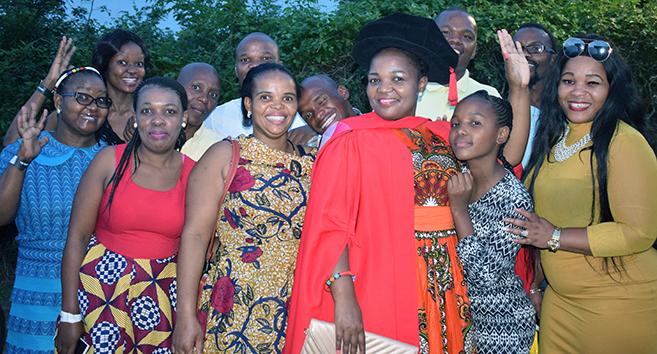 A lecturer in the School of Laboratory Medicine and Medical Sciences, Dr Bongiwe Ndlovu, has been awarded a PhD in Virology working under the supervision of Professor Thumbi Ndung’u.

Ndlovu’s research was in the field of HIV-1 subtype C vaccine development, characterising the evolution of both binding and neutralising antibody responses in acute/early HIV subtype-C infection.

She says her interest in HIV-1 research was spurred by the high HIV prevalence in South Africa, especially in young women who are responsible for nearly 30% of all new infections in the country. She wanted to contribute to scientific knowledge and the development of HIV-1 vaccines in the field.

Studies have shown that there are 113 000 new infections in young women in South Africa every year - four times higher than the incidence in men.

‘We are doing cutting-edge research in characterising HIV-1 specific binding antibodies in HIV-1 acute-infected individuals in South Africa,’ said Ndlovu.  ‘This is the first study to look at HIV-1 specific binding antibody responses in HIV-1 acute infections in South Africa. However, broadly neutralising antibodies have been studied extensively at the Centre for HIV and STIs at the National Institute of Communicable Diseases (NICD) in Johannesburg in collaboration with CAPRISA where a few individuals were discovered that developed very potent broadly cross-neutralising antibodies,’ she said.

Ndlovu and her research team are working in collaboration with scientists to identify more individuals who develop potent antibodies in other cohorts. She spent three months at NICD learning techniques used to screen participants for broadly neutralising antibodies and successfully transferred the technique to their laboratory in Durban.

Her study analysed retrospectively a group of 34 HIV-1-infected people in Durban and found that p24 and gp41-specific IgG were associated with HIV-1 slower disease progression. Her research team also identified 3/20 individuals who developed broadly neutralising antibodies. The team plans to study these participants extensively to identify some of the factors associated with the development of BNAbs.

‘Broadly neutralising antibodies bind to diverse virus strains and block HIV-1 infection, thus they can be used to provide sterilising immunity. Here they have mapped the epitopes targeted by these antibodies and found that they target glycans at position 276 of the CD4 binding site and position 332 of the V3 loop on the HIV-1 envelope respectively. The third patient did not target any of the known specificities,’ she said.

Ndlovu’s PhD study highlights important aspects in the development of neutralising antibodies which could contribute to the design of an antibody-based vaccine. She says her work is important in defining early antibody responses and the role these antibodies may play in HIV pathogenesis.

Ndlovu, who grew up in Ixopo, said: ‘Academically, I have always been a determined and inquisitive person - my dream was to become a medical scientist.

‘Poverty was the main challenge as my parents were both unemployed and the family survived on social grants. I also did both my primary and high school education in disadvantaged schools that didn’t have resources such as computers.

‘I drew my strength from the Lord, Jesus Christ. He is the source of my strength.

‘I’m very excited about this achievement, it was not easy but it was worth it in the end. My plan is to visit a variety of institutions overseas to learn new laboratory techniques that I need to continue with my research. In addition, I’m planning to do my post-doctoral fellowship overseas or in collaboration with some leading scientists in the field.’

Ndlovu, who won various awards during her doctoral studies, is the youngest in her family and mother of an 11-year-old daughter.

‘We are a very close family and are able to talk about lots of things. I especially thank my late mother, dad, brother, sister and daughter for unconditional love and support throughout my academic studies. I love them so much and I would not have made it this far without them.’

She also received a lot of support from friends and colleagues.

Ndlovu enjoys reading, jogging and spending time with her family. Her favourite dish is spaghetti bolognaise.