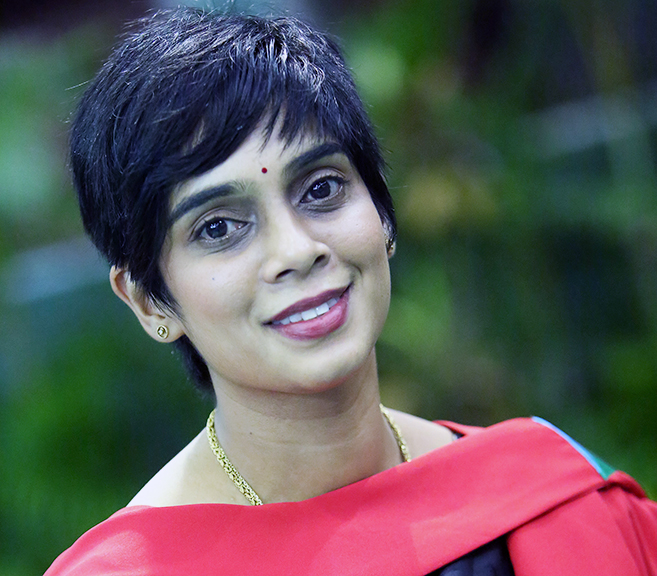 Dr Keseri Padayachy is elated about graduating with a PhD.

‘Anatomy has always been fascinating for me, and I am extremely excited to be awarded my PhD in Anatomy,’ said Dr Keseri Padayachy.

Padayachy has been in private practice as a chiropractor for the past 11 years and has lectured part-time at UKZN since 2006.

She says her study involved estimating skeletal/bone age by concentrating on morphometric measurements for each bone of the wrist from birth to 20 years of age.

‘Bone age is a measure of developmental age or physiological maturity, and refers to how far an individual has progressed towards full skeletal maturity. Skeletal maturation is evidenced by an orderly and reproducible sequence of recognisable changes in the appearance of the skeleton during childhood. Such changes include the timing and sequence of the appearance of centres of ossification, specific alterations in the morphology, and the timing and sequence of the ultimate closure of the growth plates which is particularly useful in the clinical evaluation of early and late maturation.

‘Bone age is frequently performed for the evaluation of growth and the diagnosis and management of a multitude of endocrine disorders and paediatric syndromes such as hyperandrogenism, hypogonadism and interpreting hormone levels at pubertal age. The indications for bone age estimations are well recognised in paediatrics both clinically and forensically,’ said Padayachy.

Padayachy believes her study is the first of its kind in South Africa. ‘Previous research in this country compared data to the skeletal aging atlas developed by Greulich and Pyle which was established in 1959 in the United States, whereas my research entailed morphometric measurements that resulted in the formation of data specific to KwaZulu-Natal.

‘Study results show a growth rate variation in the South African population when compared to the standard bench mark GP atlas, thus making the current research data more appropriate for skeletal age estimation in this country, thereby reducing the degree of error in calculating the skeletal age in our current population. This therefore benefits the fields of forensic medicine, anthropology, radiology, endocrine paediatrics, and clinical medicine, among others,’ said Padayachy.

‘I believe that hard work, faith and dedication will certainly lead to success in all that we do. I have always been motivated to reach for the stars.’

Her study entailed collecting data from provincial hospitals in distant places such as Rietvlei and Ngwelezane, which meant lots of long distance driving for her research associate Dr Fazila Ally and herself.

She thanked her husband, parents and sisters for their support during her studies as well as her supervisor, Professor K.S. Satyapal.

Padayachy hopes to begin her post-doctoral studies soon, examining skeletal aging of the wrist in patients presenting with HIV, MDR-TB and nutritional disorders prevalent in South Africa to compare growth changes. She also hopes to author a skeletal aging Atlas for South Africa.  ‘I believe that my passion for the academic and research environment makes me an asset to an academic institution and I hope to dedicate my time, effort and passion to ensure I see my research get results.’